The Honda CR-Z hybrid sports car is here, with official pics and details from Detroit 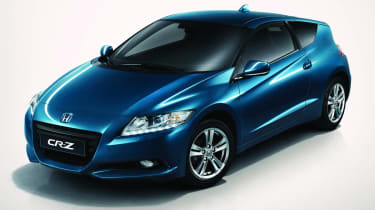 Honda’s CR-Z has finally been revealed in production form at the Detroit motor show. About time, really – it’s had a rather drawn out gestation period, the first concept for it being shown in early 2008. On the whole, the roadgoing car isn’t too different. The shape is essentially the same, although the lights and detailing have been dumbed down. It’s still reasonably smart, though, as it should be, with Honda’s intentions to open up the hybrid market to us keener drivers. It’s the world’s first manual hybrid (with a six-speed gearbox), while Honda is equally keen to shout about the effect of the CR-Z’s wide track and short wheelbase on its front-wheel-drive chassis. That’s perhaps to divert attention away from its power source – the 1.5-litre VTEC engine and electric motor combination offers up 122bhp and 128lb ft of torque. The economy and emissions figures aren’t as top notch as we’d expect for a modestly powered green car, either: 56mpg and 117g/km are figures that can be matched by a rear-drive BMW 1-series now. Still, Honda promises a bit of a drivers’ car. ‘Kart-like handling and direct steering will make it great fun to drive’, apparently. We’ll find out when it goes on sale in the UK this summer, with a 2+2 seating layout and prices kicking off at around £18K. A hotter Mugen version is expected to follow.