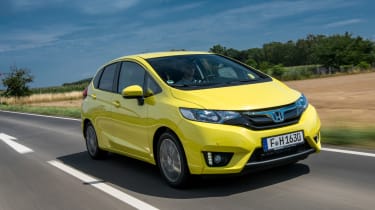 The latest iteration of a vehicle you’re more likely to curse at for impeding B-road progress than one you’d choose for that same B-road blast.

Nevertheless, it’s not beyond cars in this class to offer an entertaining chassis, engaging powertrain and talkative controls, so perhaps we shouldn’t discount the latest Jazz just yet.

The only choice Jazz buyers will need to make is whether to opt for a six-speed manual or continuously variable automatic transmission. Both gearboxes are affixed to a 1.3-litre, i-VTEC badged four-cylinder petrol engine which develops 101bhp at 6000rpm, and a modest 91lb ft of torque from 5000rpm.

The result is a 0-62mph time of 11.2sec in manual form and 12 seconds dead with the CVT, though as a relatively light car with little power to call upon, these times climb by three tenths on heavier, higher-spec models. The flip side is frugality, with up to 56.5mpg combined from the manual and 61.4mpg in the auto. 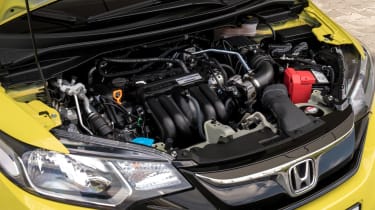 Suspension is by MacPherson struts up front and torsion beam at the rear, with lighter suspension components all round and a lighter body contributing to a relatively low kerb weight of 1066kg. The wheelbase is longer than the previous car – to the benefit of ride quality, but mainly to the benefit of interior volume – and revised suspension geometry is designed to benefit accuracy and agility.

The Jazz is not a car to raise the pulse, but it’s better than the mobile-chicane image might lead you to believe.

As the power and torque figures imply, the 1.3 is an engine that needs working hard to extract its best, though being a Honda the four-pot rarely feels like it’s complaining. The gearbox has a snappy, accurate shift that knocks you off-guard when the frumpy exterior styling has you expecting a porridge-stirrer.

The styling also leads you to expect considerable body roll, but that never materialises either. Nor does the hard ride you’re expecting to counter said roll. Instead it feels taut yet supple, with direct steering and consistent – if not particularly tactile – feedback.

It isn’t over-endowed with front-end bite or lateral grip, but the limits are higher than most owners will ever trouble. Unfortunately, for those of us who enjoy the process and sensations of driving, there’s little there to entice you in either. 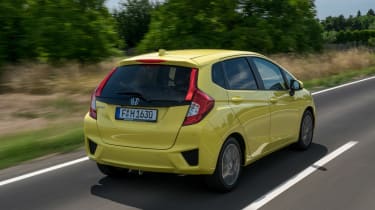 There are four cars to really consider here if you want your practical runaround to be entertaining to drive. The Ford Fiesta, Mazda 2, Mini hatchback and Suzuki Swift are all unduly good fun even in their most basic specifications. Pricing varies between £8999 (for the Suzuki) to £13,935 (for a Mini One), and all can raise a smile both in town and on the average B-road.

A basic Jazz in S trim starts at £13,495. That’s a fair sum of money, but the car’s commodious interior and healthy equipment list (a USB port, automatic lights and wipers, stop-start, air conditioning, Bluetooth and cruise control are all standard kit) go some way to justifying it. 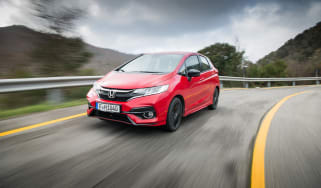 There is something endearing about the Honda Jazz Sport, but it’s not hard to find rivals that are more enjoyable to drive
Honda Jazz Dynamic - hotter supermini debuts in Frankfurt 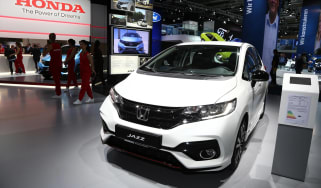 1.5-litre engine turns the Honda Jazz into a warm hatch - and a naturally-aspirated one at that
Skip to HeaderSkip to Content