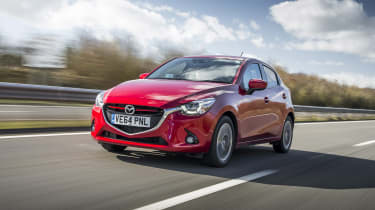 If you’re sick and tired of hearing that the Ford Fiesta is the best-driving supermini currently available (and that’s before you even consider the excellent Fiesta ST), the Mazda 2 is one of few rivals likely to challenge that claim.

This latest model arrived in 2013, with Mazda’s latest Kodo design language, new Skyactiv engines and even less weight than its already-light predecessor.

Scan the specification lists and you might wonder whether Mazda offers any choice at all in its engine lineup. All units are 1.5-litres in capacity with four cyliners, though closer investigation reveals varying outputs for the petrol models and a lone 104bhp, 162lb ft diesel, with an 83.1mpg combined economy figure.

Petrol models are available in 74bhp, 89bhp and 113bhp outputs, so no model in the range offers scorching performance. At its quickest, the 113bhp car accelerates to 62mph in a respectable 8.7sec and goes on to 124mph. Six-speed manual transmissions are standard in most models, but a six-speed automatic is also available on the 89bhp petrol. 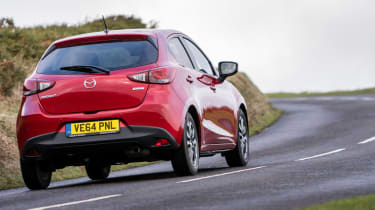 Low weight is a key priority throughout the Mazda range, and the firm’s supermini is no exception. It features what Mazda dubs its ‘Skyactiv-chassis’, which essentially means widespread use of high-tensile steels (65 per cent in this case), in order to facilitate high strength with fewer materials, and therefore less weight. A basic 2 weighs in at only 1045kg.

Suspension is by MacPherson struts at the front and a torsion beam at the rear, which is no more and no less sophisticated than a car in this class needs to be. Steering is electrically assisted and high-geared for quick responses, while braking is by ventilated discs at the front and drums at the rear, regardless of model. Unremarkable then, but par for the class.

If there’s one area in which the 2 scores highly over its Ford rival, it’s inside the cabin. The instrument cluster with its central speedometer and digital tachometer looks fantastic, while the three-spoke steering wheel and minimalist dashboard look like refugees from the MX-5. Rather uncharacterically for a small car, the 2 can be equipped with a head-up display.

The ride feels more composed than that of the Ford, without losing out in terms of body control. The tall and narrow stance hints at a perched, top-heavy feeling that never materialises out on the road, yet the 2 still feels fleet of foot rather than reluctant and leaden like some of its rivals. Over rough roads the Mazda copes far better, and remains more fluid, than many proper hot hatches meaning you can really make the most of the 2's modest power.

Where it doesn’t quite match the Fiesta is in its steering. Initial inputs seem dulled, but wind on a few more degrees of lock and the feel it starts to improve. The steering is linear too and well-weighted, so deft inputs are matched with consistent behaviour. But the lightness of the controls is what reveals the Mazda's humble roots, and although it never feels like a bargain hire car, it's no thoroughbred hot hatch.

The 1.5-litre engine – tested in 115PS spec, naturally – is willing, but lacks the top-end zing of the similar unit in the MX-5. This is to be expected, given their differences in output, but it’s a pity the 2’s gearshift isn’t infused with more of the roadster’s snap – the old 2’s gearbox was much more tactile. 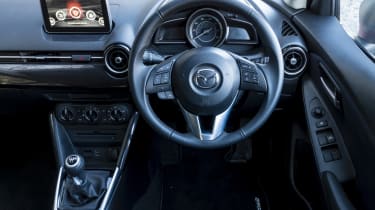 The Mazda 2 is really cohesive package; the supple damping, perky engine, linear steering work together to create a harmonious driving experience. There's the same polish to the dynamics that made the early Ford Focus and Spot Ka such appealing and enjoyable cars to drive. It may not have any real sporting pretentions, but it’s certainly fun on a twisty b-road.

It’s that Ford Fiesta again. Frankly, many would be forgiven for choosing it over the Mazda for its wider range of powerplants and the ubiquity of Ford dealerships – but ride quality aside, it probably just pips the Mazda dynamically. Pricing starts at £10,345, though you’ll want at least the 1-litre, 100PS Ecoboost in Zetec trim (£14,395) to really enjoy the sweet chassis.

>Click here to read our review of the Ford Fiesta

Otherwise, take your pick: the supermini market is huge in the UK, with Clios, 208s, Corsas and Polos as far as the eye can see. As a great-driving, left-field alternative, Suzuki’s ageing Swift (from £8999, but best in Sport trim) is also worth a look.

The 1.5-litre Sport Nav test car came in at £16,525 with options (including leather trim and a fetching shade of red mica paintwork), though resist the urge to tick boxes and this particular car starts at £15,595. Mazda 2 models as a whole begin at £12,195.