We review the Ford Fiesta 1.0 EcoBoost in sporty Zetec S trim. Can it replicate the Fiesta ST's thrills? 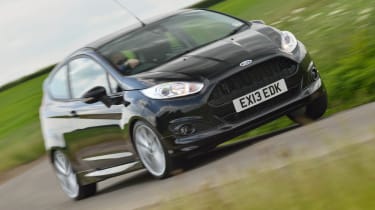 The engine is just 1 litre in size and has three cylinders, but betters the performance of the four-pot 1.6-litre Zetec S that this model replaces thanks to turbocharging. Its 123bhp and 125lb ft outputs are up 5bhp and 13lb ft, resulting in a lower 0-62 time of 9.4sec and a higher 122mph top speed. This is all combined with tiny tax band-garnering 99g/km CO2 emissions and a claimed 65.7mpg, though we’ll get back to that in a minute…

Standard equipment includes a subtle, Fiesta ST-aping bodykit, air conditioning and MyKey. The latter is aimed at parents whose kids will borrow the car, and allows elements like top speed, stereo volume and ESP disabling to be controlled when the car is started with a particular key.

The Fiesta remains the supermini class standard for ride and handling. The firmer springs of the Zetec S can sometimes seem unyielding over particularly bumpy roads – and there’s occasionally a little steering corruption – but the pay-off is sharp turn-in and a playful agility that the bulk of its competitors can only dream of. It’s notably more incisive than less focused Fiestas, which are hardly blancmanges to drive as it is.

The engine is defined by its turbocharging. In the right gear there’s an insatiable spark and punch, but it lacks overall flexibility and outside of its peak powerband there is little urge. The five-speed manual’s long ratios can shoulder some of the blame, and a shorter-geared six-speed unit would feel more at home with the Fiesta’s perky chassis. The result is you need to give the engine a mild caning to make moderate to rapid progress. The outcome? We averaged just shy of 42mpg in mixed driving, some 37 per cent short of Ford’s claimed number.

That’s still a decent return for the warm-hatch vibe the Fiesta gives off, though, and the EcoBoost engine belies its short cylinder count with ample refinement at speed and keen vocals under load.

The mini-hot hatch pack leader at the moment is the Suzuki Swift Sport, which uses a good old fashioned, rev-hungry 1.6-litre nat-asp engine with 134bhp and a close-to-achievable 44.1mpg. It’s priced from £13,749. At the other end of the scale, Renault’s new Clio GT Line combines RS Clio 200 looks with a 118bhp 1.2-litre turbo petrol engine. It gets a six-speed twin-clutch paddle-shift gearbox as standard and costs £17,395.

> For an in-depth review of the Ford Fiesta, check out our sister site Carbuyer

The price tag of the new Ford Fiesta ST – our medium-size hot hatch of choice – looks incredible value beside this 1.0 EcoBoost, starting at £16,995 (just £1600 more) with a 179bhp 1.6-litre turbo engine and a 6.9sec 0-62 time. It sits four tax bands higher with 137g/km CO2 emissions and will command higher insurance premiums, sitting 15 groups higher than the EcoBoost, in insurance group 30. The latter is likely to make the 1.0 more palatable to young buyers.

Looking for an automatic? There is now the option of Ford's new dual clutch Powershift gearbox - although it is significantly slower, due to its slightly less potent 98bhp state of tune. A lack of steering wheel paddles hints at the gearbox’s lack of sporting pretense, and although it is quick off the mark offers little in the way of driver involvement. Which is a shame when the Fiesta’s chassis is so playful.

Above the basic Zetec S sits the Red and Black Edition, which uses a more powerful varient of the same 1-litre EcoBoost engine. Power's up to 138bhp, enabling a 9sec 0-62mph time and 125mph speed, placing the Red and Black Edition up there with the likes of the larger engined - but admittedly naturally aspirated - Suzuki Swift Sport. Unsurprisingly, this pepped-up Zetec S also gets a retuned chassis and sporty interior and exterior details. It's also priced to sit directly between the standard Zetec S and full-blown ST, starting at £16,845. 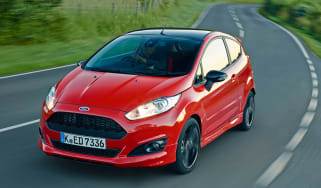 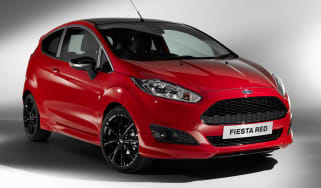 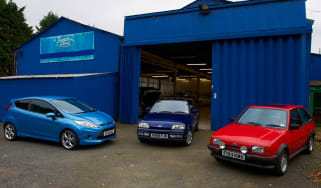 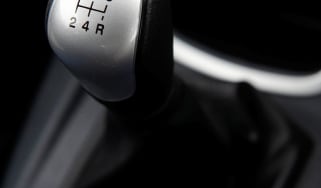 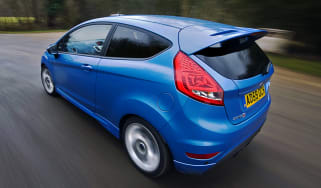 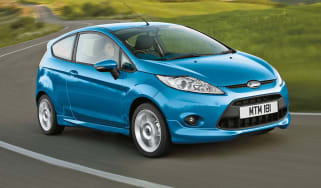 No hot versions just yet, but the all-new Fiesta is a cracker
Skip to HeaderSkip to Content