No hot versions just yet, but the all-new Fiesta is a cracker 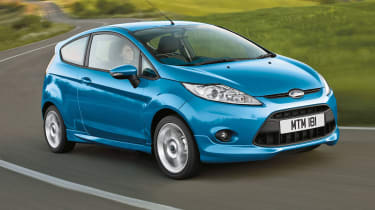 Be pleased, evo readers. Why? Because the new Ford Fiesta makes the mainstream supermini OK again. Yes, warmed-over versions of mass-market small cars have sometimes shone of late, Renault’s Clio being the obvious example, but cooking versions of anything small and modern are seldom truly satisfying any more.

Usually the steering, typically electrically-assisted, is numb or artificial, the engine feels flat and lacklustre, and they’re just too big and heavy. They’re good enough for most buyers in this safety- and convenience-obsessed age, but genuinely good fun, in a proper small-car way, they are not.

It doesn’t have to be that way, and Ford proves this with the new Fiesta. This is a car with genuine verve, perfectly matching the name of the ‘concept’ car (the real thing was already under way by the time the concept was shown) that previewed the car you see here.

It’s usual for a new car’s engineering team to benchmark rival offerings when setting standards for the newcomer. Not here, though; in dynamics, at least, the benchmark was the previous Fiesta because, across the range, Ford reckoned it was better than the opposition. (And Ford was right.)

Clever use of high-strength steels is the key. The structure’s torsional stiffness, as measured from the suspension pick-up points, which is where it matters, is three times greater than before yet the new Fiesta weighs around 40kg less than the old one. It can’t quite match the sub-tonne mass of its Mazda 2 cousin (the next most fun-giving supermini), but then it’s a bigger car.

A stiffer structure allows firmer suspension without ruining the ride, an approach obvious the first time you turn the steering wheel into an exciting-looking bend. If you’re in a Zetec S, with the handling-biased suspension settings, you’ll feel the sort of instant, precise and proportional response that makes you click with your machine. More steering movement brings an exact amount of extra turning, with understeer right off the agenda, and trimming the throttle does the same thing to the turning radius.

It has the firm but controlled ride of a truly rigid car calibrated by people who love driving, it leans hardly at all, and both brakes and five-speed gearbox work exactly as you would like them to.

And the engine? The Zetec S’s 118bhp, 1.6-litre petrol unit has continuously and independently-variable valve timing, a broad, easy torque delivery and a remarkably low official CO2 output of 139g/km. It’s very smooth, to the extent you’re barely aware of reciprocating and rotating masses, and it sounds crisp and keen. Like the rest of the Fiesta, it’s designed to keep the sensations that make you feel good while attenuating those that don’t.

As for how it looks, it’s a clever mix of dynamism and legal conformity. Only in side profile does the long front overhang reveal the truth. And the cabin is almost pure Verve: the centrepiece is a console whose controls not only look like a mobile phone’s but have similar operating logic. The whole upper facia is padded and the only real annoyance is the cheap-looking odometer display with small, hard-to-read digits.

This is a great small car. The as-yet- unconfirmed ST version should be a cracker.