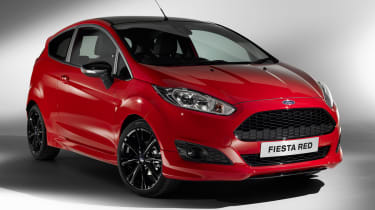 Ford’s new Fiesta Zetec S Red and Black Editions replace the outgoing 1.6 Zetec S model, combining warm hatch performance with the claimed economy of a 1-litre city car. With 138bhp on tap, the little turbocharged EcoBoost engine is the most powerful 1-litre to go into production, and most impressively that equates to a higher bhp-per-litre figure than the mighty Bugatti Veyron…

That hypercar beating performance hasn’t compromised efficiency however, because the three-pot is still able to return a claimed 62.8mpg. Puffing just 104g/km of CO2 out of its tailpipe, the new Fiesta model also slots into the second lowest UK car tax bracket, requiring just £20 annual tax after one year.

This is accompanied by a 9.0sec 0-62mph dash and top speed of 125mph, numbers more closely associated with larger engined warm hatches like Suzuki’s Swift Sport and Mini’s Cooper. This means the 1-litre Zetec S sits comfortably between the hottest 180bhp Fiesta ST and most efficient Fiesta 1-litre Zetec – which only emits 5g/km of CO2 less but does manage to squeeze under the car tax barrier.

After the success of the latest ST there’s no doubting the new Zetec S’s chassis has many talents. And confirmation that the car will feature a tweaked sporty chassis set up and electronic steering with improved feedback, means we can likely expect warm hatch handling to match the 1-litre unit’s grunt.

As the name suggests, the new Zetec S Red and Black Editions are available in either black or red, with the opposing colour on the roof, grille surrounds and mirror covers. A sporty bodykit – which looks more aggressive than the standard car but not quite as hot as the ST – is accompanied by an interior colour scheme with contrasting fabric and stitching.

Of course the standout feature of the new car is the 1-litre EcoBoost engine, though knowledge of its performance potential has been with us for quite some time now. Back in 2012 a road legal Formula Ford car completed a 7min22sec Nurburgring lap when fitted with a highly tuned version of the same three-cylinder engine.

Available to order now and in dealerships from September, the new Fiesta Zetec S Red and Black Editions can be yours for £15,995. 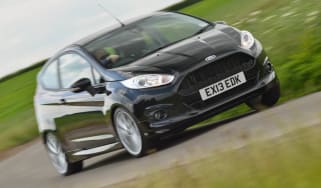