The Renault Clio GT line presents itself as a budget hot hatch alternative. Can it match the fun Ford Fiesta? 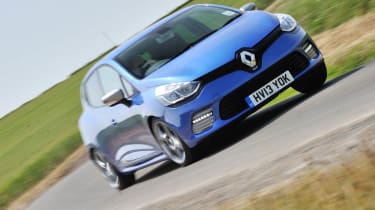 The Renault Clio GT Line, a sub Renaultsport model which aims to ape the styling and dynamic feel of its hot hatchback sibling but with lower running costs. Prices start at £17,395, making it £1600 cheaper than the Clio 200 Turbo, though £400 more than a basic Ford Fiesta ST. Our current small hot hatch champion also has a lot more power…Technical highlights?

While the full strength Clio RS 200 uses a 1.6-litre turbocharged petrol engine with 197bhp, the GT Line makes do with a dinky 1.2. Turbocharged too, though, it makes a respectable 118bhp and 140lb ft, its torque figure available nice and low, from 1750rpm. With 1186kg to shift, it hustles the Clio from 0-62 in 9.9sec, while the top speed is 121mph. The engine is mated exclusively to the six-speed twin-clutch paddleshift gearbox used in the RS 200, known as EDC, though it gains different, more economy-minded ratios. Fuel economy is rated at 54.3mpg, while CO2 emissions of 120g/km attract £30 annual road tax.

The suspension - MacPherson style up front, torsion beam at the rear – has had some proper Renaultsport attention, something the Clio is only too happy to advertise with various badges. Its dampers are 40 per cent stiffer than standard. An ‘RS Drive’ button flicks between Normal and Sport modes, altering the engine and gearbox responses, steering weight and stability control settings.

Technology wise, Renault has made strides and if it’s smartphone aping gadgets that turn you on, it’s one of the carmakers at the forefront. Its new R-Link system – standard fit on the GT Line – is immediately intuitive if you’ve ever used an iPhone and as well as operating your music or the standard TomTom satnav, it boasts a variety of apps including weather forecasts, Renaultsport Monitor (a live telemetry system to please your inner child with power graphs, a G-meter and a stopwatch) and R-Sound, which plays the engine sounds of other, mostly more powerful cars matched to your gearchanges and throttle position. What’s it like to drive?

Just like the standard Clio, it’s impressive, all the more so for its Renaultsport additions. It possesses a great chassis; sharp, firm and well in control of itself, you end up playing with its balance as it sings to the tune you orchestrate. It resists understeer far longer than most of its supermini rivals but when you do approach the grip limits of its front tyres, you can fine-tune your cornering line with a lift of the throttle or some trail braking. It’s reactive and playful, and while not as exuberant as the Fiesta ST, the Renaultsport badges are probably justified.

By comparison, the engine is laboured and feels like it has too much car to shift. The chassis balance is pivotal, as to travel briskly you’ll need to maintain momentum as much as possible. Its lack of pace feels accentuated by the gearbox, whose reluctant shifts would make you think it was more early 2000s automated manual than 2013 twin clutch, and if you’re driving quickly the wait for gearchanges feels longer and more frustrating. It’s fine at mooching pace, and puts itself about well in D mode, but comes close to ruining your pace at speed.

Press the RS button and the steering firms up nicely (precise as it is, though, it’s still completely devoid of feel) and gearshifts apparently quicken, but in D the gearbox is too unpredictable in its ratio picking so it’s best avoided if you’re leaving the car to pick the gears. Which you invariably might, as the shift paddles are low on tactility and don’t move with the wheel. The SEAT Ibiza Cupra proves a twin-clutch hot hatch can work adequately; as we found with the RS 200, Renault needs to subject its EDC to some redevelopment to properly compete.

That said, the Clio’s talents still manage to shine through and in the most part it’s a smart and enjoyable car.

Nice thing as it is, this is the undoing of the Clio GT Line. And by just one car. If it’s low running costs you crave, the Ford Fiesta 1.0T Zetec S, with its rorty three-cylinder Ecoboost engine, is cracking fun, if less gadget festooned than the Clio. It compensates with a £15,395 price tag. Worse still for the Clio, the Ford Fiesta ST – with its 179bhp 1.6-litre turbo engine and class-leading handling – is also cheaper, at £16,995. Both Fords miss out on a paddleshift gearbox, but their riposte is a much more satisfying six-speed manual transmission.Anything else I need to know?

R-Sound is a total gimmick, but amusing for five minutes as you toggle between the Nissan GT-R, Alpine A110, Clio V6 and Moto GP bike (plus many more). Just don’t try using it on a fast twisting road – it’s instantly disorientating and an excellent reminder of how pivotal your hearing is to reading the conditions.

The Clio GT Line does a very convincing job of looking just like the full-strength Renaultsport, to the point those buying the real deal could feel a little miffed. Convincing, that is, until you cop a glance at the brakes. Tiny discs up front and vented drums at the back, they’re a classic case of big spangly alloy wheels being applied to a car whose bark doesn’t quite live up to the bite.