There is something endearing about the Honda Jazz Sport, but it’s not hard to find rivals that are more enjoyable to drive 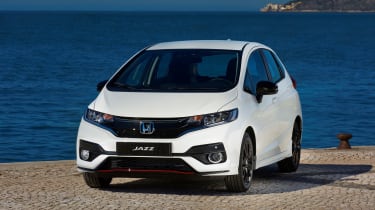 No, you’re not dreaming: the Honda Jazz – a car renowned for the amazing amount of space and practicality it can shoe-horn into such a small body – is going all warm hatch on us.

The Sport is the new flagship model for the revised Jazz range; and like its siblings, the Sport gets new styling that’s designed to make the car fit in with the rest of the Honda line-up. However, this most expensive Jazz goes beyond that, with a few bits and pieces purloined from a Type R lookalike kit, such as a thinner front splitter below the grille, and red detailing on the bumpers.

It also gets black alloy wheels, side skirts and a rear spoiler, as well as a pinstripe pattern on the seat upholstery and orange stitching throughout the cabin. But, the biggest change is that this new flagship Jazz comes with a 128bhp 1.5-litre unit, rather than the familiar 101bhp 1.3-litre petrol engine used by the rest of the range. 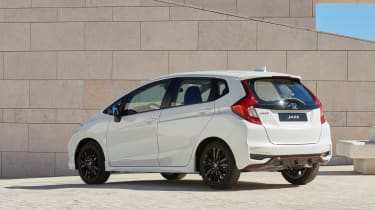 What that all adds up to is a list price of £17,155, making the Sport the most expensive version of the Jazz. So, what do you get for your money?

The first thing to say about the jazz Sport is that it’s no hot hatch. When the Volkswagen Polo GTI and forthcoming Ford Fiesta ST are knocking out the best part of 200bhp, the 128bhp Jazz Sport looks distinctly modest.

That’s reflected in a 0-62mph time that barely sneaks under nine seconds, making this no more than a relatively sporty car that rivals the likes of the Fiesta ST-Line, Polo R-Line and SEAT Ibiza FR.

The engine is very willing to rev, but that’s needed as its peak torque only arrives at a lofty 4600rpm. Admittedly, you won’t be embarrassed away from the lights around town, but on the open road, you soon learn to keep the engine spinning away in the upper reaches of the rev range to get the best from it.

What’s perhaps most striking about the 1.5-litre engine is what it hasn’t got: a turbocharger. These are almost standard issue in small cars these days, so to find a supposedly sporty supermini with natural aspiration really is something quite unusual.

Instead, all that power in the Jazz Sport comes courtesy of Honda’s VTEC (Variable Timing and Lift Electronic Control) and VTC (Variable Timing Control) technologies, while some lightweight components in the engine help to boost the performance. 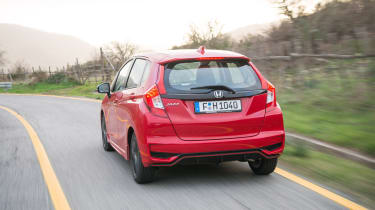 We only had a brief drive of the car – much of it in the rush-hour in Rome – but its basic nippiness, allied to the compact size and light steering, mean it’s quite good fun around town. The one downside is that the ride is a little firmer than on other versions of the Jazz, but it’s not unbearable.

Out of town, the relative lack of torque is more obvious; and, you soon instinctively start dropping down a gear to keep the revs up. Trouble is, that means you can end up spending an awful lot of time changing gear; and, you quickly realise that the engine is very noisy – particularly when you work it hard, which is what you need to do.

You might expect to be able to escape the noise on the motorway, but thanks to the short gears, the engine is still revving pretty fast at the legal limit and making a fair bit of noise.

Admittedly, there is some fun to be had in a Jazz Sport. On an open road, when you can use the sweet gearchange to keep the engine spinning away at high revs, with the exhaust providing an encouragingly sporty soundtrack, it can certainly put a smile on your face. But – and it’s a big but – there are plenty of other similar cars that will be more engaging to drive. 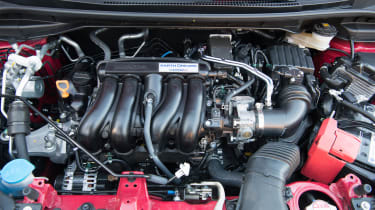 At £17,115, the Sport is the most expensive Jazz, and the Jazz already one of the more expensive superminis. It’s not easy to pick out direct rivals, because the Jazz majors on space and practicality rather than driving thrills, but the Honda works out a little cheaper than the Ford Fiesta 1.0T 125PS ST-Line and Peugeot 208 1.2 PureTech 110 GT Line, but is dearer than the SEAT Ibiza 1.0TSI 115PS FR.

True, the Ibiza’s interior doesn’t provide the same amount of space as the Jazz, and the Spanish car isn’t quite as powerful or as quick, but it is more economical and – perhaps most importantly for anyone reading evo – more rewarding to drive.