276bhp, Japanese supercar for £15-30K? With early models available for hot hatch money, is owning the first usable supercar worth it? 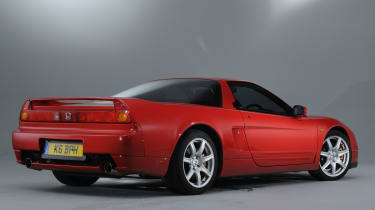 As ever, history is all. Some Honda dealers used to have NSX-centre status, but recent work is more likely to have been done by a specialist. Most NSXs will have been well looked after, but expert knowledge is vital to their wellbeing.

One other word of warning. The NSX might be as dependable as a Civic, but its running costs are more like a Ferrari’s because parts can be very expensive. Graham Horgan of NSX specialist Plans Motorsport says that while the basic servicing is not dear, there’s usually something else to be done and owners should expect to spend £1000 a year on maintenance. The US is a source of cheaper parts, though: ‘Typically they’ll cost the same in dollars as pounds,’ he says.

Hondas are well known for oil-tight engines, so view leaks with suspicion. There should be a hardening of engine note and a surge of power as the revs rise; if not, then something is amiss with either the VTEC variable valve-timing and lift system or the VVIS variable-geometry intake plumbing.

It is highly recommended that the camshaft pulley is replaced when the cambelt is changed (every five years or 60,000 miles). Failures of the camshaft pulley can cause either poor running if the belt just slips a notch or two, or, far worse, valve damage if it breaks or fails completely.

Nothing much to worry about apart from listening for untoward whines from bearings, including the input shaft bearing which might grumble in neutral with the clutch engaged. The gearchange should be light and positive. Early five-speed gearboxes numbered between J4A4-1003542 to J4A4-1005978 might have a faulty countershaft bearing snap ring which could cause major gearbox failure. If possible, check it has been replaced. That said, if the car has now covered a big mileage the chances are it’s OK.

The suspension’s balljoints, bushes and bearings do wear, especially if the NSX has been driven hard on track. This hurts if it’s a front lower balljoint, because you have to buy the whole upright at around £1000. The other parts are pricey, too. Plans Motorsport can convert an NSX’s suspension to NSX-R specification, involving springs (stiffer front, softer rear), dampers, anti-roll bars and rear lower wishbones. One effect is to reduce the pendulous oversteer to which a standard NSX ultimately succumbs. Check the tyres for wear – the rears don’t last long.

It’s aluminium, and any repairs must have been done by someone familiar with working the metal and making sure the paint bonds to it properly. Check inside the nose and tail for repairs, overspray, non-original seam sealer and other evidence of impact. Corrosion is not a problem, but panel gaps should be perfect. Make sure all the locks, catches and the pop-up headlights (if applicable) work, remembering that the cost of replacing even insignificant items can be very high if they are NSX-unique.

The cabin’s furnishings are very durable but check everything works and be worried if any warning lights don’t extinguish when they should. The Bose stereo is unique to the NSX, so if you’re looking at a car with aftermarket sounds and you want to reinstate its originality, be prepared to spend an easy £1000 here.

NSXs are rare so you may have to wait a while to find the right one for you. The NSX Club of Britain estimates a current UK population of about 250 cars, of which maybe 50 are post-2002 facelift versions which command the highest prices – typically around £30,000. An early car might cost as little as half that, but age and mileage make future heavy expenditure more likely. Occasionally you see NSXs for under five figures, typically cars that have been heavily damaged and repaired. Tread very carefully here.