Renault’s trick new Mégane RS is out to steal its crown back from Honda’s Civic Type R, but could Volkswagen’s Golf R actually be the hottest hatch of all? The rigours of an evo Supertest will provide the answers 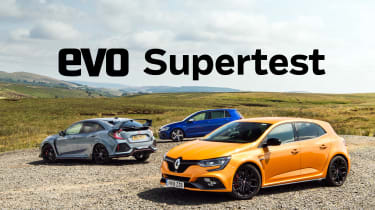 There are good times to be had in the Golf R, but it’s the first of our hatches to step onto the podium. Will Beaumont nails exactly why: ‘There are moments in the VW where you witness its genius. It enters a corner on its nose, all skittish and lively, then, as you get on the throttle, you feel the rear tyres driving the back end round. But these moments aren’t that frequent, and, even more frustratingly, they aren’t repeatable – you see a corner approaching that you think it’s going to come alive around, but instead it just turns and grips, dispatching the bend with ruthless efficiency.

‘Yes, driven aggressively, it comes alive more often, but it’s difficult to maintain such levels of commitment on the road. As fast as it is, you aren’t gratified all that often with some proper excitement.’

I’ve advanced my defence for the Mégane and James seems largely to agree, but there are caveats. ‘It drives well, but you’ve got to be prepared to relearn the way you approach corners,’ he says. ‘It’s all down to that four-wheel-steer system, which has the ability to generate outrageous grip and agility. It feels eerie at first, with the rear sashaying around just a fraction of a second behind your instructions to the steering. But start to go faster and it begins to make sense.’

Certainly does. But James isn’t wholly convinced: ‘It’s a shame that Race mode adds a horrible droning bassiness to proceedings. The engine responds crisply enough, mind, with a gutsy mid-range and enough bite at the top end to make visits to the red line worthwhile. I just wish the gearbox was as good. There’s a pleasingly mechanical feel to changes, but our test car suffered from a baulky third to fourth shift that required repeated exposure and patience to bypass.’

I could live with that. Not sure James could. The Mégane is runner-up, then. A split-team decision, maybe, but then the Civic Type R is, all told, too extraordinary to be denied. I admired it, felt flattered by it, but didn’t love it. My fellow testers are less equivocal, Will being perhaps the most enthusiastic advocate.

‘There’s a feeling in the Civic that its tyres are some kind of qualifying specials. Not only do they grip as though the rubber is fusing with the tarmac but they absorb most of the road’s roughness, too – even though you’re acutely aware of their scarily low profile. The Honda’s engine may not be that refined and its steering may not be as pleasant as the others, but its  gearchange and brake pedal feel so much tighter and firmer respectively that they certainly make up for it.

‘And then there’s the incredible sophistication to the chassis, its ability to ride with that much comfort while generating that much traction and keeping the body supremely controlled is a trick that can’t be matched by any other sub-£100k car you can currently buy.’ Fair enough. But I’m already counting down the days till the Type R has to square up to the forthcoming Mégane Trophy.