We brought the Hyundai i30 Fastback back to its spiritual home in Germany's Eifel mountains, where there is a racing track you might well have heard of before... 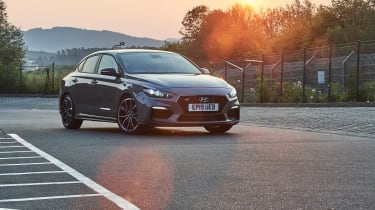 We’re big fans of track days. As our roads become more crowded and populated by those who consider driving a chore rather than a privilege, more and more of us continue to turn to track days to enjoy our car’s performance. It’s why evo's own track events are always sold out.

But there is one track that remains the holy grail - the Nürburgring. The Nordschleife. The Green Hell.

Contender for the most famous racing circuit on the planet, it is undoubtedly the most gruelling. The most challenging. It’s 12.9 miles of tarmac twisting, bucking, dipping and rising through the heart of Germany’s Eifel mountains. Rain or shine it’s a circuit that takes no prisoners.

So, when we decided it was time for us to reacquaint ourselves with the Green Hell, we wanted a car which would feel right at home there. A model which wouldn’t be an embarrassment or a mobile chicane among the faster machinery, but something which wouldn’t bankrupt us or break our backs on the 800 mile return trip over either.

What did we choose and how did we get on? Watch the video to find out…..

The Hyundai i30 Fastback N fitted the bill for our trip. When Hyundai formed its new N Performance car division, it chose to base its European development centre less than a kilometre from the circuit. It’s a car which has been signed off on the track and has covered thousands of miles on the technical challenging roads that also weave in and around it.

But before we take our i30 Fastback N ‘home’, we have to get there. France and Belgium streak past, and we make a brief diversion to pass by another of our favourite circuits – Spa. But there’s no time for a lap as Germany’s Autobahns beckon.

A stone’s throw from Nürburg is a section of the A1 autobahn and it’s unrestricted, and also almost empty. It is literally a road to nowhere, ending suddenly near the town of Brück, where it presumably awaits planning permission or budget to carry on. 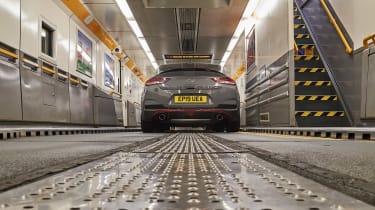 It’d be rude not to try to match the Hyundai’s claimed top speed on 155mph on the deserted, arrow straight road. There’s a slight dip down into a valley, but without too much effort the speedo needle spins round and only stops moving at 168mph. It feels rock solid at this speed too, with carefully-balanced aero helping to keep the i30 planted.

Instead of mixing it with the mish-mash of bangers, bikes and bewildered tourists which turn up on a public day, we’ve treated ourselves to an RSR Premium track event the following morning. These days limit the number of people on the circuit and the briefing makes sure they know what they’re doing.

Porsche 911s of various vintages and specs are by far the most popular in the paddock. Nissan GT-Rs are next, followed by Suzuki Swifts. These are available to hire, so drivers can fly in, drive a Swift and fly home again with little risk. Other hire cars are available too, complete with instructors, including a pair of i30 N hatchbacks.

The chat starts straight away, with guys from all over the world swapping experiences about cars and the circuit. This is why we make the schlep over from the UK. Not only is there great driving; there is a real camaraderie which transcends barriers of language and wealth. Even the owners of a Huracan or GT2 RS don’t look down on the hot hatch drivers. 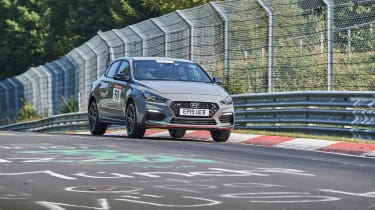 Before long we are directed onto the start grid for what’s termed a ‘track walk’ but is really a slow drive, thankfully. We stop at key parts of the circuit and told how to drive them to make sure we are quick, but also how to avoid coming a cropper. You can't describe a place like the ‘Ring in a classroom - you need to see it.

Briefing over, it’s time to get on with the driving. It's easy to think that it is irrelevant for engineers to develop a car to drive quickly around here as it makes no difference on the road. But Hyundai didn't test here with the intention of setting the fastest time. They know that the 'Ring will reveal any problems with a chassis, brakes, tyres or engine which you wouldn't spot on any other test track. The variety of corners, cambers and inclines here means if a car works on the Nordschleife, it will work on any road.

And the i30 N does work here; it feels like it has come home. It’s fast, of course, but its real strength is its chassis. The combination of its e-differential and the tweaked aero dynamics of the Fastback ensures it can get the power down out of the slower corners and it remains planted through the quicker stuff. While the brakes always feel strong with no fade. And the combination of its more focused suspension settings means it combines great feedback and control with a precise balance, even through the notorious Schwalbenschwanz, a corner Hyundai’s Albert Biermann insisted all i30 N models had to master.

A day at the ‘Ring, no matter the car from a hot hatch to a supercar is always, without a doubt a memorable one. It’s where you are able to enjoy your car’s performance with impunity. Switch off from the outside world and enjoy the thrill of driving at its purest.

It was the hot hatch that upset the status quo, and now the i30 N is back with more power and tech
New 2020 Hyundai i30 revealed with new look, tech and transmission