It was the hot hatch that upset the status quo, and now the i30 N is back with more power and tech 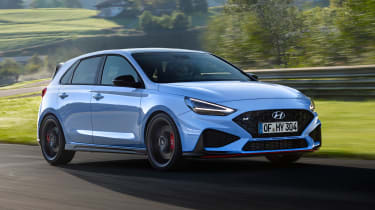 Hyundai has revealed an updated version of the brilliant i30 N hot hatchback following a wider range update revealed earlier this year. As with the standard i30, visual changes are limited, but Hyundai is promising it has honed the package with select upgrades, while also widening its appeal thanks to a new dual-clutch transmission.

The changes start under the hood, where the 2-litre turbocharged four-cylinder engine has picked up a subtle 5bhp rise to 276bhp. It’s peak torque which has seen a more substantial 28lb ft rise though, and it’s available over a much wider rev band between 1950 and 4600rpm. This uplift in figures has yielded a 0.2sec reduction in the 0-62mph time at 5.9sec, while the top speed is unchanged at 155mph.

The new eight-speed dual-clutch transmission itself is all-new and has been designed specifically for the i30 N. As such, the new ‘wet’ style transmission doesn’t just prioritise performance over economy, but also features bespoke software to improve responsiveness and shift feel. The oddly named N Grin Shift mode, for instance, will overboost the turbo for 20 second periods and shift up through the gears without cutting torque, giving a pronounced jolt forward on upshifts. When the 20 seconds is up, the transmission will maintain full-torque upshifts on changes when over 90 percent throttle is applied, but the turbo will return to normal outputs.

Hyundai hasn’t messed with the chassis setup much beyond a subtle re-tune of the dampers and steering calibration. There is a new stabiliser bar fitted on the rear though, joining the in-cabin strut brace. The brake package is as before, consisting of two-pot calipers gripping 360mm front discs. 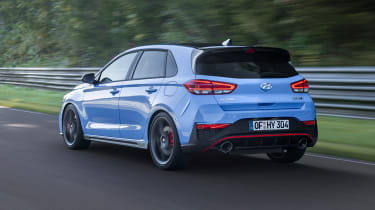 Visually, the new i30 N shares its sharper exterior visuals with the N-Line model, but maintains its trademark triangular third brake light and red pinstripes. The wheels are a new set of forged 19-inch units wrapped in the same bespoke Pirelli P Zero tread as before, but save a combined 14.4kg over (non-UK) models fitted with the standard cast 18s. The exhaust finishers are also larger, and still controlled via the brilliant N driver modes.

The cabin’s updates consist of a new infotainment system and fresh bucket seats, but the fundamentals of an excellent steering wheel and dial pack offset with cruddy plastics and dated visuals remain unchanged. So too is Hyundai’s in-depth, but easy to use N Driver mode functionality as before, which gives drivers a superb spread of variability to the driving experience without being overly complex or time consuming.

Local pricing and final specifications will be announced closer to its arrival in the UK early next year, but Hyundai will continue to only offer the high specification i30 N Performance Pack and not the 247bhp base car. When it does arrive, it will also join a whole new family of N models including the Kona N and eagerly awaited i20 N supermini, and given the original was such a good car right out of the gates, there’s reason to suspect the next one will be even better.

The new BMW M4 Competition applies its war paint, but there’s no manual coming to the UK
Visit/tesla/model-s/203121/200mph-tesla-model-s-plaid-set-for-2021-launch