Distinctive and engaging, the i30 Fastback N proves the original hatch version was no fluke 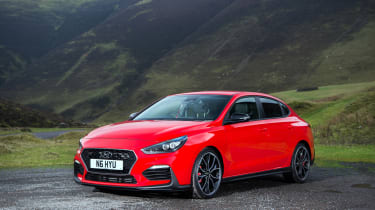 The Hyundai i30N has seemingly come from nowhere to shake up the hot hatch class, immediately out pacing and out pointing cars such as the VW Golf GTI and Peugeot 308 GTi. One of the first cars developed under the watchful eye of ex-BMW M head honcho Albert Biermann, the i30N delivers real driver engagement and punchy performance in a genuinely desirable package. Keen to capitalize on this success, the brand has broadened the line-up to include a sleek Fastback derivative. Only available in 271bhp Performance guise (the slow selling 242bhp variant will remain as a five-door hatch only), the latest addition aims to blend the standard car’s hard-edged appeal with a touch more civility and refinement. It’s like a cut-price Mercedes-AMG CLS 53, if you will.

We’ve already driven a disguised, pre-production version of the Fastback last year, but this is our first chance to get behind the wheel of the showroom-ready machine. With the billowing black bags and dazzle removed what’s underneath looks pretty good. The comparison to a Mercedes CLS goes further than the concept of a slinky and low slung family car, because there’s more than a hint of C63 Coupe to the Hyundai’s rear end, neatly integrated ducktail and all, while in profile the i30 has the proportions of a GLC Coupe (that sounds bad, but it’s actually quite attractive, because in this instance the car isn’t perched on high-rise suspension), which is largely down to a roof that sits 5mm lower than the hatch’s. At the front the Fastback takes its cues from the more upright and traditional sibling, carrying over its panels and fixtures lock, stock and barrel. It’s equally familiar inside, where the five-door’s interior has been dropped in virtually unchanged, which at least means you get cracking multi-way adjustable sports seats and a low-slung driving position. Oh, but there is a bigger boot, a happy by product of the extended rear end – although like the hatch versatility is compromised by the imposing (and rather cool) strut brace. 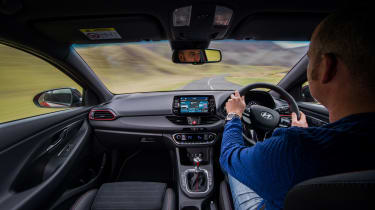 While the changes to the sheetmetal are fairly obvious, there have also been some tweaks to the chassis, all of them aimed at giving the Fastback a slightly more grown-up mien (although insiders say this updates will soon be adopted for the hatch). In fairness it’s fairly mild stuff, essentially running to longer bumps stops (up from 55mm to 62mm), spring rates that have been reduced by five percent and a front anti-roll bar that’s had a single millimetre shaved from its diameter.

The rest of the car remains as per the Performance, which means it gets larger 19-inch alloys (wrapped in 235 section Pirelli P-Zeroes), an electronically controlled limited-slip differential and larger brake discs (345mm front and 314mm rear). Also carried over are the adaptive dampers and the multiple driver modes that deliver around 2000 different suspension, steering and throttle combinations. That sounds overwhelming, but it’s easier to navigate than you’d think, plus neat shortcut keys on the steering wheel allow you to quickly access your favourite combinations. Another neat feature is the rev-match function that delivers a crisp blip of the throttle on downchanges for heel-and-to made easy. Happily, you can switch it off when you want to get busy on the pedals yourself.

Suspension is fairly conventional, with struts at the front and a multi-link axle at the rear, while the steering is electrically assisted and reasonably quick at 2.14 twirls lock-to-lock. 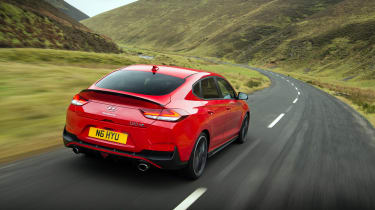 Powering the Fastback is the familiar 2.0-litre T-GDI unit that delivers a competitive 271bhp 6000rpm and a muscular 260lb ft of torque in a plateau-like line from 1400rpm all the way to 4700rpm. As a result the sprint from standstill to 60mph takes just 6.1 seconds, while a top speed of 155mph is within reach. Essentially it’s the same unit used in the five-door, but with some very subtle tuning to make it a more understated presence – the gurgling idle is still there, but with the volume turned down. Even on the move and with Sport or N mode selected the Hyundai’s adaptive exhaust is more muted, the high rev growl a little more distant and the pops and crackles on the overrun a little more muffled and restrained. Yet while its bark is diminished, its bite remains as strong as ever.

It’s the deep-chested torque that grabs your attention, the motor punching hard from less than 2000rpm with only the slightest hint of lag in the higher gears. Even in Comfort the throttle is usefully sharp, but you’ll want Sport for a really prompt response to your right foot. Of course you can wind it out to the redline, and there’s meaningful urge all the way there, but this is a car that can make devastatingly rapid cross country pace even when short-shifting through the ratios.

Speaking of which, the Fastback gets the same six-speed manual as the hatch. It’s got a nicely short throw and real feeling of mechanical connection, but it can occasionally be a little notchy if you try and rush a shift. Still, it’s connected to a light and progressive clutch that plays its part in encouraging you to zap up and down the box just for the hell of it.

The pre-production car we drove last year did without the strut brace and, on the road at least, I’d be lying if I could sense any difference in this technically stiffer production model. Still, this takes nothing away from the Fastback, which is arguably a slightly more rounded proposition than the five-door original. It’s still not as devastatingly composed as a Civic Type-R or as nervously hyperactive as Renault Megane RS, but the Hyundai serves-up good old fashioned hot hatch fun by the bucketload. The steering in all its modes benefits from decent heft and the sort of bright, mechanical feedback that will be familiar to owners of older BMW M cars. Even in the greasy conditions we tested the car in the Pirelli P Zero’s found decent bite on turn-in, while the electronically controlled slippy front diff hauled the Hyundai out of the slower stuff with only the subtlest hint of wheelspin, and it never does anything as unruly as slide wide under power. This is not an expressive car – the rear end is too tightly locked down for that – but you can subtly alter its line with a dab of the brakes on the apex, the i30’s attitude shifting enough to straighten you up for a cleaner exit. It’s intuitive and openly telegraphed, allowing you to simply concentrate on the road ahead – particularly welcome when you’re on unfamiliar ground.

A happy byproduct of the revised suspension is some welcome compliance, so even is tauter Sport setting the Hyundai flows rather than fidgets. It makes the Fastback an easy-going daily driver, as comfortable carving across town as it is mooching along motorways. 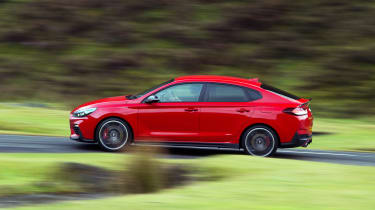 You’ll need £29,995 to get behind the wheel of the new i30N Fastback. Now that might sound like a hefty chunk of cash, but consider the amount of engineering that’s gone into the car and it’s not unreasonable. It’s not short of kit either, boasting the sort of gadgets, gizmos and luxuries you’d have to fork out extra for on more upmarket or mainstream rivals.

In terms of refined character and upmarket appeal, the VW Golf GTI comes closest to matching the Hyundai. Now only available in Performance guise (although you can still get three and five-door variants, plus there’s the choice of a manual or DSG gearbox), the evergreen Golf is still down on power with a 242bhp output. Still, there’s trick differential and a ride and handling balance that’s second to none, while its solid gold image means it doesn’t need coupe-esque looks to make it desirable. Prices start at a not inconsiderable £30,965.

At this money, both the Hyundai and VW stray into Honda Civic Type R territory. It’s no looker, but the £31,525 packs knockout 316bhp punch and is blessed with a chassis that summons otherworldly levels of grip, traction, poise and balance.