Peugeot 308 GTi review – a genuine alternative to the Golf GTI 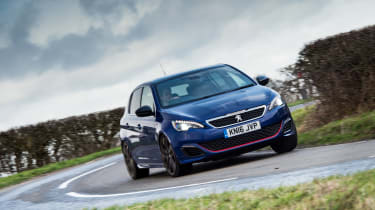 The Peugeot 308 GTi 270 by Peugeot Sport is the latest car in a long line of hot hatches that attempts to take on the VW Golf GTI at its own game. Compared to the hard-edged 208 GTi by Peugeot Sport, the 308 GTi is slightly softer and more friendly.

The 308 GTi feels solid and locked down over demanding roads and yet manages a degree of playfulness and adjustability when you want it. The quality of engineering in the 308 GTi is apparent, just as it is in other models fettled by Peugeot Sport. While not quite as exciting as the old RCZ-R or aggressive as the smaller 208 GTi by Peugeot Sport, it does have a character that grows on you while remaining capable and involving.

> Click here for our group test between the Peugeot 308 GTi by PS, the Hyundai i30 N and VW Golf GTI

The 308 GTi has a remarkably small engine, its four-cylinder turbocharged motor is just a 1.6 when its direct rivals all boast 2-litre engines. Despite it’s relatively tiny capacity it still packs a big enough punch. The 308 GTi has 266bhp, that’s 19bhp more than the Ford Focus ST and 49bhp more than the VW Golf GTI. What’s more, it’s a far more characterful motor than the engines found in its rivals. 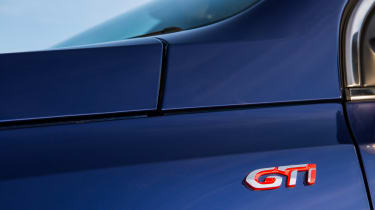 Also working in the 308 GTi’s favour is the interior, which is significantly different from the often dour feeling German hot hatches. It’s made from quality materials and has distinctive quirks, the most significant being the tiny steering wheel and high-set instruments. It isn’t for everyone though, as it can obscure the dials for certain people.

> Click here to read our review of the Golf GTI

For those seeking an exciting daily drive that offers Golf GTI-busting performance without the compromise of something like a Megane 275, the new Peugeot 308 GTi makes a worthy alternative. 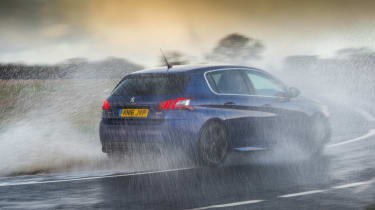 > Performance and 0-60 time - The engine delivers impressive performance given its smaller-than-usual 1.6-litre engine. Read about the Peugeot 308 GTi's performance here

> Ride and handling - Relatively docile to drive despite its power output, though the small steering wheel doesn't add much to the enjoyment. Read about the Peugeot 308 GTi's ride and handling here

> Living with a Peugeot 308 GTI - Our long-termer proved trouble-free over 9 months but entertained us in great measure. Some reservations over the cabin layout, but not the cabin quality. 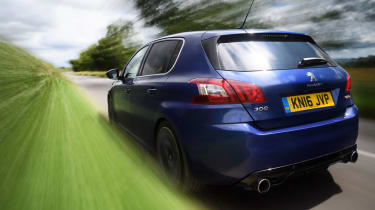 The Peugeot 308 GTi is priced aggressively against its rivals at £29k, and the generous standard specification means there's little in the way of options so you can't venture far from the list price. So, should you decide to add the £500 sunroof or a cost-option paint finish at £650, you won’t feel too guilty. Automatic LED headlights and a digital instrument cluster are part of the standard kit – both are optional extras on the Golf GTI.

The hot hatch sector is fraught with capable rivals each with their own USP justifying a place in the market. VW’s ubiquitous Golf GTI carries more brand cachet and is priced on par with the Peugeot, but its commonality and lower (standard) specification are noted. Ultimately it is less thrilling than the Peugeot, too.

An eCoty champion and Nürburgring record-holder, the Honda Civic Type R is a sensational hot hatchback well worth its £31k price tag. It outpunches the Peugeot with 316bhp and provides an incredibly resolved driving experience, but the overwrought styling may be too much for some.

New to the segment is Hyundai’s impressive i30 N: an all-rounder which nails the hot hatch recipe. Crucially, it’s at home on jagged British roads and is pleasingly intuitive, too. The £28k list price is tempting and like the 308 it’s well specced before you start clicking through the configurator.

The new Renault Sport Megane RS has a substantial technological arsenal to call on, including hot hatch firsts, such as four-wheel steering. There’s every chance it could be as good as the preceding model and it could displace the 308 as the premier French hot hatch of choice.