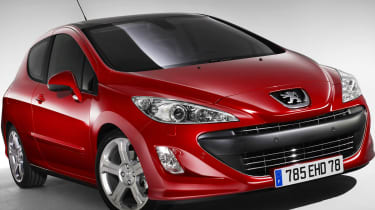 'We will not be making an RC or GTI version of the 308 in the forseeable future,' said Peugeot's chief of technical communications. And why should it, given the promise of the RC Z coupe (see separate story)? But the company has nevertheless been exploring new combinations from its parts bin, with the result you see here.

It's the 308 GT, and there's nothing hardcore hot-hatch about it. This is no rival to a Megane 225 or even a Golf GTI, but don't dismiss it for that. Occasionally in an evocentrically-barren range lies a buried gem, and this might be it.

The 308 GT takes the most sporting-looking of the range's trim variations, adds the fiercer nose introduced on the RC Z plus a tailgate spoiler, an aluminium gearlever knob and pedals, and finishes the visuals with a racier steering wheel taken from the 407 Coupé. It sits on lowered suspension (by 10mm) whose springs are stiffened with revised damping to suit. The five-spoke wheels wear 225/40 R18 tyres.

The other obvious enhancement is the power, up to 175bhp by using the the 1.6-litre, direct-injection turbo engine in the state of tune found in the 207 GTI and the Mini Cooper S. As with the Mini it's matched to a six-speed gearbox, albeit by Peugeot and not by Getrag. Door-count is three or five, to choice.

Sounds a lukewarm makeover so far, but it all works rather well. The engine note is deep and crisp enough to hold your interest, although it's hardly musical and can get boomy at high revs. Not that it needs to be revved hard, thanks to a fine reservoir of low-end torque (up to 195lb ft, briefly, thanks to an overboost facility) and the strong off-boost energy that direct injection and a high compression ratio can give. From a standstill to 62mph takes 8.3 seconds, but the torque delivery makes the Peugeot feel livelier than that.

Fine so far, but the best part is the way it steers, rides and handles. The stodgy, artificial weighting of the 207's electric system is absent here, for instead we find a lower-tech hydraulic arrangement albeit powered by an on-demand electric pump. Lower tech usually means higher purity and transparency, and so it proves. The GT feels crisp and alert, with a properly mechanical-feeling link between road, wheels and steering wheel, so you feel properly connected to the front end's surprising grip.

The stiffer suspension brings the handling balance into better focus, allowing a taste of the power-off line-tightening that Peugeot used to do so well, yet the ride over bumps is rounded in its firmness and never makes you wince (unlike progress in the 207 GT or, worse, the shocking 207 GTI). This is a car in which you can enjoy going quickly without being battered by an attitude, and given the UK's shamefully disintegrating roads the 308 GT makes a lot of sense.

I was ready to be underwhelmed. The reality is a glimpse of hope from a carmaker long accused of losing the plot. It's not cheap, though, at £18,995 for the aesthetically preferable three-door.