Coupe concept with promise of return to exciting handling 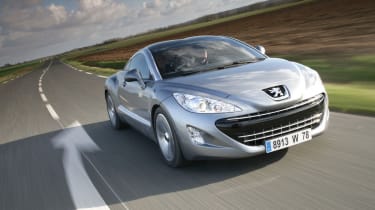 This car,’ says Gilles Boussac, Peugeot’s chief of product planning, ‘replaces the 205 GTI spirit, although with a different silhouette. And I know you in the UK are very keen on the idea of a dynamic Peugeot.’

But this car is a concept car, a designer’s fantasy distorting the look of the 308 hatchback as far as it is possible to go without losing the reference point. Isn’t it? Not so. Design vice-chief Keith Ryder says it has been created as a production-feasible car that just needs a convincing business case. That I’m about to drive it suggests the desire to make it is there. And if that happens, which we’ll know by October’s Paris show, then it will look almost exactly like this. ‘It must be like this or it will be nonsense,’ declares Boussac.

So Peugeot looks set to make its very own Audi TT. The RC Z’s shape is the work of designer Boris Rheinmuller. It’s wider than a regular 308, with a track increase to match, and those roof-hoops are solid machined aluminium. The look would stay for production. ‘To try to fake it with paint would look cheap,’ says Ryder.

This concept’s entire body is of carbonfibre; the nose has a more angular mouth and there are no separate front wings. ‘We can do the rear window in glass,’ adds Ryder. ‘It will have slightly less of a double curve but the heating elements will emphasise the shape of the cross-section.’ The roof would stay in carbonfibre, as a reference to the 908 Le Mans car. ‘And the interior must be right,’ says Boussac. ‘We can’t sell it down the river with cheap materials.’

The building of Peugeot’s concept cars is masterminded by Jean-Christophe Bolle-Reddat, who insists they should always work, so the leather-clad interior is fully functional, the 308 range’s facia design lending itself well to a racy coupe.

Under the bonnet is the expected PSA/BMW turbo 1.6, here uprated to 218bhp thanks mainly to an extra intercooler. The initial throttle response is soft, but followed by massive part-throttle wallop. This feels a genuinely quick car, helped by – at last – a new six-speed gearbox with a shift as precise as the old five-speeder’s was springy.

The wide track and a hip point 6cm lower than a normal 308’s make the RC Z feel squat, flat and planted on the road, and its steering has a meaty precision to match. It is a concept, though, so there’s much fine-tuning to do of the currently clunky ride, but even as it is the RC Z feels a promising driving machine. Production surely beckons.