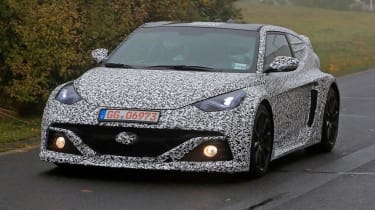 Korean automotive giants Hyundai and Kia have announced a joint £69.5m investment in Croatian electric supercar company Rimac. The collaboration will focus on a strategic partnership in the development of two high-performance electric vehicles that will top their contemporary ranges.

The first of these two models will be an electric version of Hyundai’s incoming mid-engined sports car, which Hyundai says will be revealed before the end of 2020. This electric sports car will be based on Hyundai’s mid-engined petrol model that will form a performance flagship for the Hyundai N brand, one previewed by the RM.16 concept that was revealed in 2017 and has since been spotted testing on the Nürburgring. Whether this model will also share that concept’s first generation Veloster-derived bodywork is less certain.

The second incoming model is more futuristic, and will be in the form of a new high-performance hydrogen fuel-cell vehicle, following on from Hyundai’s previous ix35 Fuel Cell, and more recent Nexo hydrogen-powered SUVs. This is all ambitious stuff for a manufacturer that has only recently become a serious player in the performance car market.

Both Korean manufacturers have pledged investments (Hyundai £55m and Kia £14m) to collaborate on these new models, using Rimac’s unique knowledge of high-performance electric components and development to accelerate both their product development towards a more sustainable product plan.

From Rimac’s perspective, the scale and manufacturing power of the Korean giants will bolster its own growth, and by creating yet another established partner within the wider industry, should only strengthen the EV specialist.

Further details about these new performance models remain tantalisingly thin, but without the  baggage associated with traditional performance brands such as BMW M or AMG, Hyundai and Kia don’t appear to be holding back their ambitions to become leaders in electric performance car development, and it looks like it might happen sooner than we expected.