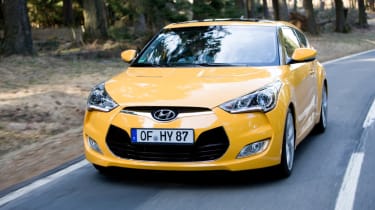 What is it? A very original take on the compact coupe idea, with two doors on the passenger side and one on the driver's side. That way the driver sees the Veloster at its raciest-looking, while passengers can get into the back easily from the other side. It's a possible rival for a Renault Megane Coupe, a VW Scirocco or a Mini Clubman. The concept and the style are the work of Hyundai's Californian studio. Technical highlights Apart from that body, there's a new 1.6-litre, direct-injection petrol engine with 138bhp, a stop-start system and a low 132g/km CO2 output if linked to the optional six-speed double-clutch gearbox. The car we drove was a late prototype, so there was still work to do on interior finishes, wind noise and suspension calibration.  What's it like to drive? Promising. You sit low in quite a laid-back driving position, with a dashboard full of V-formation angles and pretend aluminium highlights spread out ahead. It's heavily styled but it suits the car. The six-ratio gearchange is neat the steering feels more precise, and more natural in its weighting, than many other electrically-assisted systems. So far, so good. Two snags, however – or three if you count the wind rush around the electrically-tiltable glass roof. One is that for all the Veloster's keen, throttle-adjustable handling and entertaining chuckability, it's not much good at soaking up sharp breaks in the road surface or filtering out road roar. More work is needed on the suspension's bushings. The other is that the frugal engine feels flat at low revs, forcing frequent downshifts, and even at higher revs it's more noise than action. What the Veloster really needs is a turbo version of this engine, which would also create a halo model without which the new car might not make much impact. Rumours of such an engine with 200bhp-plus are very welcome. How does it compare? Adequately with lower-powered rivals, not well with the turbo-enhanced ones that driving enthusiasts are likely to buy. But nothing else offers quite this clever combination of rakish looks and practicality.  Anything else I need to know? Rear headroom is very tight if you're tall, bearable if you're not. The rear hatch has a huge glass area which extends well into the roof, making the cabin very airy, and the rear side door's handle is hidden so it's just the shutlines and (black) centre pillar position that reveal the door-count. RHD cars will have the appropriate door arrangement, unlike the Mini Clubman. Sales start in November at around £18,000. And our three-star rating could rise if the engine gets more fizz and the suspension more refinement.