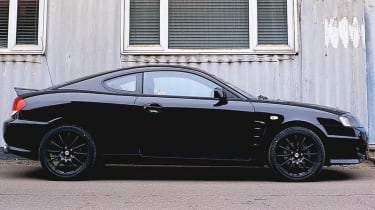 When I dropped OU05 OTT off at Dave Brodie's Brackley base a few weeks ago while testing their Morego Golf GTI, I suggested they might want to take a look at the 2.7 V6 motor and make a few recommendations. On my return they presented me with a list of ideas that included working on the heads, upping the compression ratio and the addition of a 'StarChip' - which they'd already fitted.

The chip is estimated to liberate another 18bhp and it certainly feels like it. There's a noticeable swell in torque too, confirmed by the standard dash-mounted torque meter, on which the needle now swings past the 200lb ft mark. We'll have to pop the Hyundai on the rolling road soon to see exactly how high we've climbed above the standard 165bhp with the remap (and the Pipercross induction kit fitted a couple of months back), but the urgent throttle response and extra urge from 4500rpm onwards augurs well.

I'd been meaning to get the Hyundai's wheels changed for some time, and with all this grunt around it was becoming a necessity. The new wheels would have to be slightly bigger to improve steering response and grip, and also lighter than the standard 17in rims to keep the unsprung weight to a minimum. What I really wanted was a set of proven race-spec wheels, and as you won't find any more proven than those used by the 2005 British Touring Car champion, I gave Matt Neal a tinkle.

As well being a very successful race outfit, Team Dynamics are wheel manufacturers, and it just so happens that they make a road version of Neal's race wheels. Called the Pro Race 1.2, they weigh in at just 9kg each.

I didn't have to copy the colour from Neal's racing Honda, but the glossy black 18in rims, wrapped in new Dunlop SP9000 rubber, look pretty cool if you ask me. They've also lightened the steering, which was a bonus I'd not expected. A few high-speed tours around Castle Combe confirmed our lap times are definitely coming down, so, just like the Westfield, it's coming together beautifully...