Can Dickie Meaden beat Steve Sutcliffe in a straight(ish) race? We sent them to the Circuit Nuvolari with a pair of Hyundai i30 Ns to find out. 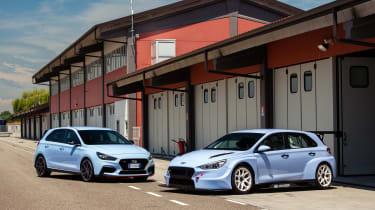 We all know what happens when a race car takes on a road car around a race track. The racer wins. Its very reason for being is to be able to circumnavigate a race circuit as quickly as possible. It doesn’t have to do the day-to-day stuff. All it needs to do is win.

What, though, happens when a car company that’s built a race car decides to implement some of that DNA into its road car? Interested to see what happens when you take two models from the same mother but with two very different remits, we put the Hyundai i30 N and the i30 N WTCR in a race with a difference. Can the WTCR complete seven laps of a circuit before the i30 N finishes six? Watch the video to find out….

Even with an additional lap to complete, it’s still easy to assume it will be a walkover for the WTCR car. But we’ve done our homework, and at the Tazio Nuvolari circuit near Milan in Italy, the 2018 WTCR championship winning car is lapping in the region of one-minute twenty seconds. The i30 N road car, meanwhile is around 15 seconds a lap slower on the 2.8-kilometre circuit. So if our sums are correct, the race car is going to have to go pretty hard to catch it.

Driving the i30 N is Steve Sutcliffe. It’s a car he likes and respects very much, having driven prototype examples ahead of its launch and on plenty other occasions for evo on group tests and features since.

He’s quietly confident of his chances, having had previous experience of the i30 N on track and knowing the lengths Hyundai N went to in its development. Its 271bhp and 279lb ft will give him the performance required around the tight Nuvolari lap, the i30 N’s electronically-controlled limited-slip diff and its Pirelli P Zero tyres, developed specifically by the Italian tyre manufacturer for the N range, the balance and grip.

It’s the additional attention to detail that Steve’s more focussed on and that he thinks might give a chance. Areas such as the i30 N’s uprated oil pump, improved engine cooling and aerodynamics and the braking technology that primes the system in readiness for activation, that has Sutcliffe fired up. During his six he’s not expecting any drop off in performance.

Running in ‘N’ mode will provide the ideal track settings for the suspension, throttle response and the e-diff and makes the i30 N as aggressive as possible. The ESC and traction control will also be switched off.

Next door in the pit garage is evo contributing editor Dickie Meaden. An experienced racer that has seen him race everything from GT40s to testing Le Mans winning Audis, but he has never been behind the wheel of Hyundai’s Championship winning i30 N, or driven this circuit. Another reason for Steve’s confidence, perhaps. 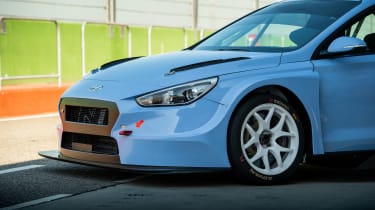 Hyundai i30 N WTCR car is quite a machine. If you’d like one, Hyundai’s motorsport division will sell you a car like this for around £125,000. It is based closely on the road car to meet regulations for the World Touring Car Cup, is also powered by a two-litre turbocharged engine driving the front wheels via a six-speed sequential gearbox.

Weighing in at less than 1,300kg, it is 300kg lighter than the road car and produces and additional 70bhp too (350bhp). The suspension is fully adjustable, but unlike Steve’s car, Dickie will have to ask his team of engineers (a WTCR team can consist of no more than 10 team members) to wield the spanners and laptops to make any desired changes rather than just select a new mode on the screen as per the road car.

The racer also benefits from running with Yokohama slick tyres, but they require careful management to bring them up to temperature and then not to overheat them over the race distance.

On hand to give Dickie some advice on how to maximise the i30 N WTCR’s performance is Hyundai’s World Touring Car Cup driver Norbert Michelisz. He’ll run through the car’s launch control system, which is a little more complex to those found on a road car, and also advises: “Remember we have no tyre warmers. You will need to go carefully for maybe two laps until there is some heat in the rubber. Then you can push it more.” Will this give Steve a crucial advantage over such a short race distance?

Find out by watching the film here