The first mass-produced hydrogen fuel cell vehicle has arrived in the UK, offering a 369 mile range from a £6 fill up 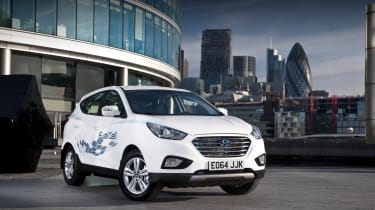 Ok, so it's not the most evo story out there, but it's something that could have a significant effect on UK motoring: The first mass-produced, commercially available fuel cell vehicle has arrived in the UK. Leading the way in hydrogen fuel cell tech, Hyundai’s new ix35 Fuel Cell crossover is available to order now, offering 100kW of power and an impressive range of 369 miles from a £6 fill up. Six pounds!

That power output translates into 134bhp and 221lb ft of torque, placing the ix35 Fuel Cell alongside normal ICE cars on the specs sheet – the ix35 Fuel Cell has substantially more torque than many, but undoubtedly weighs significantly more.

Despite being electric, the ix35 Fuel Cell’s powertrain doesn’t enjoy the immediate torque surge normally associated with these motors, with controlling systems being used to mimic the power delivery of an ICE in order to reduce wheelspin and motor degradation. No fuel cell drift championship then...

That might sound a bit boring, but if the green ix35 is to be a viable alternative to ICE cars, it’ll have to last. And fast revving hydrogen fuel celled vehicles are currently less durable, though things are rapidly improving.

The ix35 Fuel Cell’s arrival comes conveniently after UK Business Minister Matthew Hancock announced £11 million of UK funding would be invested in hydrogen transport infrastructure. That should ensure buyers of the eco ix35 and its future rivals will have refilling stations within reach. Currently hydrogen car owners often have to travel some distances to fill their cars.

Whilst the ix35 Fuel Cell might offer little in the way of thrills, it does at least emit nothing more than water and oxygen from its tailpipes. It also costs an astonishing £6 to fill the tank with hydrogen, meaning a journey from London to Edinburgh could cost a matter of pence more than a fiver. Take that public transport.

As things stand, the ix35 Fuel Cell is only being offered to companies and larger scale agencies in lease agreements. The cost to manufacture the relatively low-volume vehicle means private sales won’t be realistically possible for some time. But Hyundai has confirmed that the ix35 Fuel Cell’s launch is part of a wider plan to ‘bring prices down to levels closer to the normal car.’ That should see them falling below £30,000, where the current ICE ix35 range sits.

Whilst fuel cell vehicles do nothing to offer us the Thrill of Driving, they could one day provide the masses with a very realistic form of tax free and incredibly cheap daily transport. Thanks to their range, they’re amongst the most attractive form of electric vehicle.

The first UK buyers of the ix35 Fuel Cell are expected to receive their new cars in early 2015.