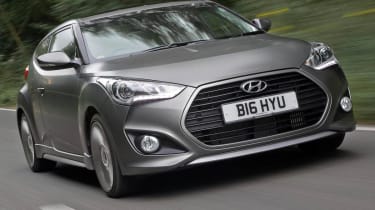 Hyundai’s Veloster Turbo will cost £21,995 when it goes on sale in September. The unique ‘1+2-door’ coupe – it gets two doors on one side, one on the other – will take on turbocharged versions of practical coupe rivals such as the Vauxhall Astra GTC, Renault Megane and VW Scirocco. It gets a turbocharged version of the regular Veloster’s 1.6-litre GDI engine. Its power outputs climb fairly substantially as a result, 184bhp and 195lb ft maximums representing rises of 46bhp and 72lb ft. The full torque figure is available from just 1500rpm, too. The Veloster Turbo hits 62mph in 8.4sec on its way to a 133mph top speed. European buyers get a more powerful version of the Veloster Turbo, as well as firmer dampers to increase its agility. CO2 emissions of 157g/km put it in tax band G in the UK, while claimed fuel consumption is 40.9mpg. The Turbo retains the standard Veloster’s quirky looks, adding new 18in alloys and a subtle bodykit, while Hyundai’s first ever matt paint option is among the colour choices. SE is the only trim level, and includes satnav and a reverse parking camera as standard. The Hyundai Veloster Turbo SE goes on sale in the UK on September 24.