We drive the turbocharged version of the Hyundai Veloster coupe. A value alternative to the VW Scirocco? 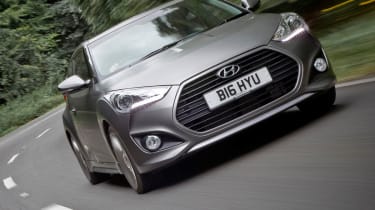 What is it? The Hyundai Veloster Turbo is the coupe we should have had at the start. Hyundai's novel coupe-cum-hatchback does what no other right-hand-drive car does, which is to have two side doors on the nearside and just one, longer door on the driver's side. It looks like quite a racy coupe but its rear seats are rather more accessible than a coupe's usually are. But as launched, with 138 skinny-feeling bhp from its 1.6-litre engine, the Veloster did not feel very thrilling. A turbocharged version was promised, and this is it. Europe gets its own specifically calibrated version, with less power than the US-market Veloster Turbo, while engineering tweaks carried out off the back of extensive British A- and B-road testing has been applied to all EU cars.

Prices start just below £20,000, but the bast value lies with the Veloster Turbo SE, which for £22,120, adds equipment such as a touchscreen satnav, a reversing camera and heated seats. Technical highlights? Power drops from the US-spec 204 to 184bhp, but the same 195lb ft of torque  arrives at a lower speed. Real-world driveability is the aim, helped by longer gearing in the six-speed manual gearbox which benefits economy and cruising refinement. Direct injection means the compression ratio can stay efficiently high at 9.5:1, and the turbocharger is a twin-scroll unit better able to make use of exhaust pulses. Firmer dampers, bigger front brakes, 18in wheels and revised settings for the electric power steering, intended to make it feel more naturally weighted, complete the mechanical changes. Deeper valances, an extended rear spoiler, round front foglights and a central pair of exhaust pipes identify the Turbo, along with the option (£525) of matt metallic grey paint. What's it like to drive? A regular Veloster feels a bit flat at low revs and frantic at high revs. The turbocharged engine transforms the whole car, with a keen, precise and practically lag-free pull from low revs. Its torque delivery is strong and impressively linear, though once you’re past 5000rpm its delivery tails off a little and its vocals become quite thrashy. Overall, the engine is pleasing in its power delivery but unsatisfying in soundtrack, and the car’s increasingly big American tuning scene surely has ways of better matching noise to sensations with a sports exhaust. Ultimate acceleration isn't very special – the claim is 8.4sec to 62mph – but you can cover ground very quickly in this car thanks to its strong mid-range energy and confident overtaking ability. No sporting Hyundai (not a broad canon, it must be said) has felt as rapid and capable as this one. The gear ratios suit it well, the shift is neat and slick, and the brakes have an unusually solid, progressive action. There's a touch of steering tug if you accelerate hard out of a tight bend, a bit of dynamic spirit too easily quelled by an intrusive traction and ESP system. You can switch it off, but under really aggressive driving you might still catch glimpse of a flashing orange light. The steering itself is naturally weighted, as promised, and the action is properly precise. And there’s even some feel – not spades of it, but in a market swarming with CO2-massaging synthetic steering racks, it offers more of an insight into grip levels than most. The handling balance has the fluidity and throttle-interactivity usual in a Hyundai; the Korean company has always understood that side of things. Flick through some esses or hare along some undulations and you'll discover excellent body control, but short, sharp bumps are greeted with quite a thud – as they are in the standard Veloster. Our long-term test car suffered a buckled alloy and damaged tyre from one pothole, a mixture of the hole’s deepness and the lack of suspension give (and, indeed, tyre sidewall) the likely reason.

The Veloster Turbo is a modern car but some of its most interesting characteristics come from old school charm – a mechanical handbrake, no stop/start and an ESP system deactivated with one press rather than a hold-down-for-what-feels-like-eternity process all help endow it with a sheen of character more polished (and technically more capable) rivals can lack.  How does it compare? Obvious rivals are a VW Scirocco in 1.4 TSI 160 or 2.0 TSI forms and the Vauxhall Astra GTC 1.6T. The Astra is unnecessarily corpulent, the Scirocco dearer to buy. The fact is that the Veloster Turbo acquits itself very capably in this company, and at £21,995 with lashings of equipment and a five-year Triple Care warranty, it's good value as well as useful in its architecture.

From a handling and agility angle, the Veloster Turbo’s biggest problem comes from a double-pronged attack from one company. The Ford Fiesta ST (179bhp, £16,995) and Ford Focus ST (247bhp, £21,995) mightn’t look as interesting or have as much equipment, but both are quicker and more exciting, the former especially impressive and the current leader of the small hot hatch pack.

The Veloster has a rival relative, too, the Kia Proceed GT sharing some of its bits (getting a 201bhp version of its engine) but delivering them in a more traditional and practical three-door package and costing roughly the same. It also feels a bit sharper to drive than the Hyundai. Anything else I need to know? Despite the Veloster Turbo’s large dose of extra talent over its regular base car, it makes up just 10 per cent of the model’s overall sales. The regular, 138bhp car starts at a whisker over £18,000.

And while the Veloster has four seats, a bigger boot and the perception of more practicality than a regular coupe, those six foot or over will be very cramped in the back and the 2+1 door layout’s novelty value subsides rather quickly when you’re travelling along and want to put stuff in the back.