The Infiniti Emerge-e is one of the most exciting cars at the 2012 Geneva motor show, and points the way for a range-topping electric coupe for the Japanese brand 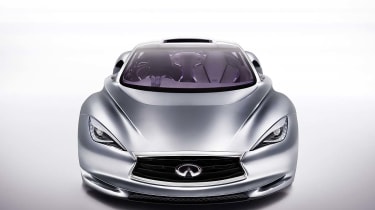 Meet one of the most exciting cars at the 2012 Geneva motor show: the Infiniti Emerg-e. It might look like a proper motorshow teaser, but this mid-engined electric sportscar is based on a ‘viable’ mechanical package, with much of it developed with Lotus, with company insiders confirming that there is a ‘a very realistic chance’ that a road-going version will make it into limited production.

Beneath the swoopy lines of its carbonfibre bodywork, the Emerg-e might seem to possess some familiar proportions. That’s because it sits on a modified Lotus Evora chassis, using the same ‘range extending’ technology that Lotus has been developing for its own use.

Highlights include twin electric motors delivering a peak of 300kW – or 402bhp if you prefer. These are driven by a 14.8 kW/h battery pack which can be recharged by either plugging it into the mains (it will take about 10 hours on a UK domestic socket) or alternatively by an on-board 1.2-litre litre three-cylinder petrol engine which produces 47bhp and which turns an electrical generator. As with other ‘parallel hybrids’, including the Fisker Karma, there is no direct connection between the internal combustion engine and the wheels.

Infiniti claims that the 1598kg coupe can accelerate from rest to 62mph in just 4.0 seconds, while reaching its top speed of 130mph from a standing start will take 30 seconds. It has a 30 mile range in pure electric mode, but the efforts of the petrol engine mean that its ‘blended’ petrol-electric range is a more impressive 300 miles.

And despite Infiniti’s status as Nissan’s upmarket brand, the Emerg-e has been almost entirely developed in Europe, with the project officially part of the British Government’s Technology Strategy Board initiative which is investing in carbon-reduction technologies. The winning design for the concept is the work of an American designer, Randu Rodriguez, but design development was led by Nissan Design Europe in Paddington, London – and the engineering has been coordinated by Nissan’s European Technical Centre in Cranfield, Bedfordshire.

Infiniti is planning to produce two running prototypes of the Emerg-e later in the year, with the possibility of small-scale production as a range-topping halo model if demand is reckoned to be sufficient.