We get our first go behind the wheel of the new Infiniti Q50 Eau Rouge sports saloon. Watch out AMG and M Division? 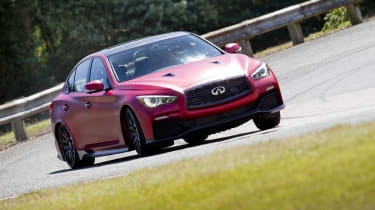 A mere year in development, and following ‘evolving concept’ appearances at the Detroit, Geneva and Beijing motor shows, Infiniti’s Q50 Eau Rouge is on the brink of being given the production green light. The 560bhp, Nissan GT-R-engined, all-wheel-drive supersaloon is intended to draw a line under the company’s so far tentative stabs at presenting itself as a brand with performance credentials (the FX Sebastian Vettel fooled no one). This is being achieved by exploiting the full potential of Infiniti’s corporate assets and motorsport links to make a high-performance luxury saloon capable of taking the fight to Europe’s big hitters, not least against the clock with its projected sub-4sec 0-62mph time.

‘Why do the Germans have to be the key players here?’ asks Infiniti’s Peter Smith, who’s heading up the Eau Rouge programme. ‘Japan has some of the best engineers in the world. Why aren’t we using them to facilitate a global premium performance brand?’ It’s a question Infiniti boss Johan de Nysschen felt required a definitive answer. ‘And it was to make something “super special”,’ relates Smith.

We’ve convened in the boardroom of Wellingborough-based RML Group, Nissan’s long-time motorsport partner in BTCC and endurance racing (also responsible for building that other GT-R-engined special, the Nissan Juke R), and our location gives a clue to the nature of the Q50 Eau Rouge project. ‘We recognised that this was something that couldn’t be done through the usual channels,’ Smith concedes. ‘As you can imagine: huge corporation, red tape, slowly grinding wheels within wheels, etc. So how do we keep the vision and ambition intact? A skunkworks team: Infiniti’s innovation and performance general manager Jerry Hardcastle, myself and a Japanese engineer with RML, Atsuo Tanaka, to implement the build. And then it was pure goodwill, gathering information to see how we could do this. The corporate parts bin aspect is very important. Working with RML we could build anything you like but it’s got to be believable. All the parts have got an Infiniti or Nissan part number. So it really is a realistic proposition.’

What to put under this Q50’s bonnet? The team considered a variety of options: Infiniti’s own V8, possibly turbocharged, or maybe a supercharged version of the base 3.7-litre V6 from the G37. ‘It would have been a lot more straightforward,’ admits Hardcastle. ‘An easy way to boost the power without having to change a lot of mechanicals.’ But it was decided that none of these had the ‘wow factor’ required by de Nysschen. ‘Wow’ was the 3.8-litre, twin-turbo V6 from the GT-R. But how to do it? ‘We came up with about 50 different ways,’ says Smith. ‘One was to just take a Q50 upper body, cut the top off a GT-R and just put it on there. Quick and dirty, right? This isn’t the way to build a brand or a performance line.’

Clear that the Eau Rouge would be a luxury performance saloon powered by a GT-R engine and not a GT-R with a four-door Q50 body, the team had to accept that the way ahead would be fraught with challenges. ‘A major concern was the pure power output of the GT-R engine: this kills most transmissions,’ claims Smith.

‘We needed to find the transmission from within the Infiniti parts bin, and we did in our HG seven-speed auto. It can handle the torque. Moving forward, we’ll take a look to see what would be ideal. We know what we have to do to compete and we want to make sure that the whole powertrain is up to that task. But for now with the HG auto, the fixing points are different, the electronics are different. And when we did a quick packaging study of dropping the engine in, we could see there were interferences. The first study said: “That’s OK, you can put it in there, the crossmembers fit, but you’ve got to extend the front by 120mm.” That got the “reject” stamp straight away.’

But it was just the beginning of the headaches – remapping the GT-R’s VR38 engine to give 560bhp and 442lb ft of torque was the easy bit. ‘We kept hearing over and over again that the electronics were never going to communicate between the engine and the vehicle, that there’d be blank screens on the dash. Then there was cooling [the GT-R engine runs hot], developing the suspension and tyres, increasing the capacity of the front and rear diffs, designing a stronger propshaft and packaging some monster brakes. This all takes time to sort. But I can say with pride that all the issues have been resolved, thanks obviously to RML’s strong input and contributions from the Japanese engineers through secret channels of information, helping us get the data in order to make everything work.’

Infiniti’s F1 connections presented less of a problem and have been integrated into the programme from the start. ‘The cosmetics are clearly F1-inspired,’ says Smith. ‘F1 should be married to a performance brand. For the car you’ll see today [at RML], we’ve kept the show car styling for the front with carbonfibre for the front, sills and rear. The only difference is we’ve kept the rear doors and rear bumper standard. Inside we’ve got the show car’s Recaro front seats and, although they’re not on the car here, we plan to keep the show car’s red carbonfibre trim inserts. One of the things we’d like to do going forward is work with our friends at Red Bull to refine the aero package. The front splitter, rear splitter and rear wing all work as intended but there’s more to come.’

Naturally, Infiniti’s other Red Bull assets, Sebastian Vettel and test driver Sébastien Buemi, have been behind the wheel too, providing valuable feedback in the ongoing dynamic development. ‘They’re hyper-sensitive compared to us,’ remarks Hardcastle, acknowledging that there’s a balance to be struck between on-the-limit racer observations and that kind of feel ordinary mortals will expect should the Eau Rouge reach low-volume production.

To no one’s great surprise, Vettel reckons the car is right on the money in raw performance, but the exact chassis spec is still a work in progress. Hardcastle explains: ‘Adaptive dampers? Going forward we can talk about that but we’re not at that stage yet. The technology for us to use exists but, for the demo car, there’s one spec and that’s to keep it fairly simple. It doesn’t have the Q50’s direct adaptive steering and it does have passive dampers. And the exact power split for the four-wheel drive hasn’t been decided yet. Currently it’s predominantly rear-drive with the excess going to the front when needed, like the GT-R. That’s the current set-up, so you’re always maximising the rear axle but, when it’s overloaded, the power goes forwards. What it does give us at the moment is an overriding feel of a rear-drive car, particularly if you’re doing any sort of sports-style driving, but obviously you have the security of four-wheel drive.’

In the metal and carbon, the Q50 Eau Rouge looks (and sounds) every inch and decibel the weapon capable of disrupting Germany’s supersaloon hegemony and finally nailing Infiniti’s ambition to be regarded as a serious performance player. As for an image upgrade, the Q50 could hardly have expected this in its wildest dreams. Fingers crossed that green light for production illuminates soon.