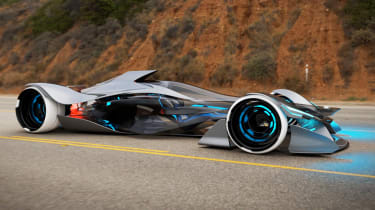 Infiniti’s motorsport-centric vision of the future has come out on top at the 2014 LA Auto Show Design Challenge, as voted by the public.

Descended from today’s single-seaters, the Synaptiq previews a modular race car designed to compete in the 2029 ‘ARC’ event – a vehicle triathlon with air, rally and circuit stages. Built around a central fuselage, mechanical extremities can be interchanged depending on environment.

That means the team and driver can outfit the Synaptiq with slicks for the first stretch of the race ­– a grands prix-style sprint from LA to Las Vegas –before chunkier (but disturbingly low-profile) tyres take their place for an off-road desert stage with a Grand Canyon finish line. The final leg of Infiniti’s hypothetical triathlon is a gymkhana-style jet race.

But speed is only part of the concept, which also previews Infiniti’s next-generation human machine interface. Augmented reality, 3D holograms and wearable technology transform the relationship between car and driver. Infiniti ambitiously promises to enhance the passion and performance of driving by connecting the driver’s thoughts to the car via trick race overalls.

‘The suit connects the driver’s thoughts through a spinal lock attachment into the pod; woven with synthetic muscles, the outfit suspends the pilot into the driving position,’ says Infiniti. ‘The suit both enhances and gives tactile resistance to the driver to simulate a physical interaction with the machine.’

The concept, designed in response to the brief ‘Sensing the Future: How Will Cars Interact With Us in 2029’, garnered the most online votes in the competition’s eleventh year. Previous winners have included a Mazda sports car with the ability to switch between autonomous and manual driving modes and a hydrogen-powered Mercedes civil enforcement off-roader.

‘Our designers loved participating in the LA Auto Show Design Challenge, conceptualising how Infiniti drivers could interact with their vehicle in the coming decades,’ said John Sahs, interior design manager at Infiniti. ‘It’s extremely gratifying for the public to also dream a bit with us and identify with such ideas that may seem a bit futuristic, but may just not be that far away from reality.’