Infiniti's latest concept is an electric speedster called the Prototype 10 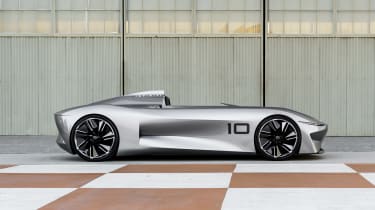 Infiniti has unveiled its latest performance car concept at the 2018 Pebble Beach Concours d’Elegance. Called Prototype 10, the concept takes the form of an electric-powered performance car that, like the Prototype 9 revealed at last year’s Concours, takes inspiration from an earlier time in the history of the motor car.

Overseen by Infiniti’s Japanese design centre, penned in the UK and reproduced in physical form in San Diego, Prototype 10 takes its visual cues not from golden-age 1930s racers but ‘early Californian speedster’ sports cars - and naturally, offers a few indications as to the way Infiniti’s future products may look as a bonus.

The form of Prototype 10 is more angular than speedsters of old, but the inspiration is clear to see, with the simple open cockpit followed by asymmetric bodywork - a single fin behind the driver’s place echoing the similar treatment of cars like the Porsche 718 RS60 and Jaguar D-Type.

Geometric lines slice across an otherwise smooth body - a cue Infiniti says is designed to reference ‘the shock of sudden acceleration’ from the car’s electric powertrain. Headlights are ultra slim, while the chin spoiler below the angular front end is coloured black rather than body colour to offer a contrast to the silver paintwork.

Much of the car’s design is focused on an overhead aspect, including the asymmetric cockpit layout, the fly screen ahead of the driver, and the use of large cooling ducts for the electric motor. The cockpit itself is simple - there’s a ‘race-inspired’ steering wheel mounted on carbonfibre struts, a low-mounted black leather driver’s seat and a four-point harness, and of course just a pair of pedals. Less palatable is the use of Infiniti’s steer-by-wire technology, though given Infiniti shows no sign of dropping the tech we can at least expect it to improve in future.

We’ll certainly see more electric and hybrid technology from Infiniti in the future (the company’s plan means all new Infinitis from 2021 will feature some kind of electrification), so in that respect the Prototype 10’s electric drivetrain makes perfect sense.

The concept uses a flat floor as a result of battery packaging, something that has allowed designers to situate the driver so low in the chassis. Infiniti’s press materials are heavy with terms like ‘the simple love of driving’ and ‘exploring an electrified future’ but slim on detail on the powertrain itself, but given Prototype 9 effectively used the setup from a Nissan Leaf, perhaps that information has been withheld deliberately.

Taken as more a hint as to the future rather than a vision of it, Infiniti reiterates that its future cars will offer a choice of pure battery electric drivetrains, parallel hybrids, and “e-Power” range-extended models, while high performance will be a priority for all.

Design director Karim Habib also suggests that the Prototype 10 is evidence that Infiniti is considering how to implement EV technology into lighter, leaner and sportier vehicles too, which in itself is a worthwhile pursuit when so many other manufacturers are leaning towards electrifying SUVs rather than low-slung, lightweight sports cars. Modular technology should help in this respect - potentially allowing both those SUVs and sports cars to sit on very similar platforms, without significant compromises for either genre.