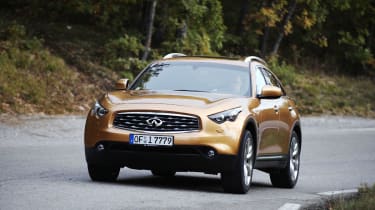 The Russians love this car, which might just tell you all you need to know. That’s right, the FX50S has gone down a storm in almost every market it’s been launched in, the key zones being America, the Middle East and the former Soviet Union.

Its appeal is based to a perhaps unprecedented extent on how it looks. Name another good-looking SUV. Hard, isn’t it? Loath though I am to admit it, this long-prowed, low-roofed, 21-inched FX has a real something about it.

In many ways it’s the worst of cars – a pseudo-SUV that’s enormously proud of its pseudo-sporty demeanour. What’s stopping me sticking the knife in completely is that it does actually drive very well – X6 and Cayenne-rivalling levels of grip, poise and tactility plus a surfeit of power from its 5-litre V8. But £55,000 for a modestly-proportioned interior constructed from Freelander-level materials means beauty is only skin-deep.

Of course the FX isn’t a conventional family holdall, but the fickle urbanite market it’s pursuing in Europe is drying up, making things tough not only for the V8 flagship, but also the more socially and financially acceptable £42,000 FX37 GT, powered by the coupe’s V6. Then there’s the £36,000 EX37 – a low-fat FX with some of the visual and driver appeal but less assertive and confident.

So here’s the thing. Thinking of buying an X6? Neither was I. But if, through some baffling momentary lapse, I did fancy a curious crossover, I’d go for this one. And change my name to Oleg.