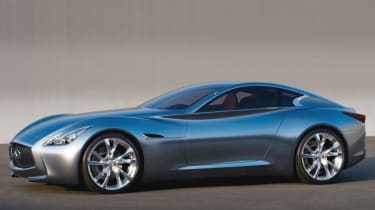 Although unlikely to make production, design boss Shiro Nakamura told us certain elements of the design such as the unusual C-pillar may be seen on forthcoming models.

He also hinted that another model – a luxury four-seater seems the best guess – may well be added to the range in 12-18 months time. When it does appear, it’s likely to boast hybrid power, which also underpinned the Essence concept. On the show car the standard 3.7 V6 was mated to a pair of turbos, as well as a 158bhp electric motor, giving nearly 600bhp.

Production hybrids won’t be as powerful, but they will be here next year, to fulfil the demands of the American market. Although hybrids are likely to come to Europe, Infiniti is also working on diesel power for its two SUVs, the EX and FX. The 3.0-litre V6 is a Renault-Nissan engine and will be specially tuned for Infiniti, developing around 240bhp. It will be available with both manual and automatic gearboxes.

The oil-burner should help to boost sales considerably, although the firm insists things are looking bright, with 15 dealers now open across 9 countries and upwards of 600 cars sold so far. That’s 80 per cent of their stated target. Incidentally, the biggest seller is the flagship £55k FX50, accounting for 50 per cent of sales and currently enjoying a six month waiting list.

The first UK dealership (at Reading) is currently being built and is due to open this September.