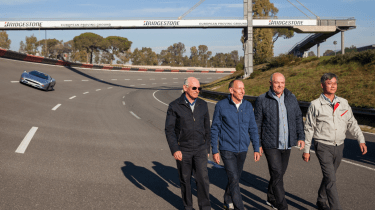 As well as an authentic development car, Bridgestone also called upon an esteemed group of people, all of whom were associated with the XJ220’s creation to make sure the tyres were spot-on. The collection inclded chief Jaguar engineer Alastair Macqueen, tyre engineer Shinichi Watanabe, Jaguar works race and development driver Andy Wallace, and Danish racing driver John Nielsen who piloted the Jag around the Nordschleife in a time of 7min 46.36sec and set the unofficial lap record for a production car.

The process that Bridgestone has gone through to create the XJ220’s new rubber has been documented in a 42-minute film called Bridgestone x Don Law XJ220: The Legend Lives On. The new XJ220 tyres have gone through the same arduous and exacting scientific tests that all new tyres are put through. But, rather than impenetrable levels of secrecy around the development of the rubber, the entire process of creating the new tyres for the old Jag has been documented in The Legend Lives On.

Jaguar’s 542bhp supercar was originally fitted with Bridgestone Expedia S.01 tyres. However, Bridgestone ceased production that tyre in the XJ220’s size (255/55 17 front and 345/35 18 rear) some time ago. Instead of remanufacturing the tyre as it was, the Japanese firm decided to create a replacement using completely modern technology.

Despite the XJ220 being over 25 years old it’s more than capable of giving a new set of tyres a thorough workout. As well as setting a Nordschleife lap record, the XJ220 officially held the title as the fastest production car in the world from 1994 to 1998 with a speed of 217.1mph and, on its original tyres, it was capable of accelerating from 0-60mph in 3.6sec.

The pre-production XJ220 that the team will be used, chassis number 004, was the first XJ220 to hit 200mph and went on to compete in GT racing before being converted back into a road car. 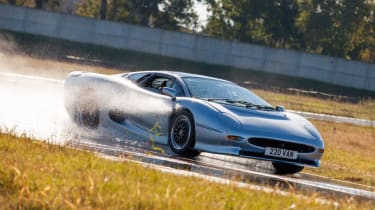 As well as footage of laboratory testing and the building of prototype tyres, the film also shows the XJ220 in action. There are period clips of the Jag being subjected to high-speed tests and being driven at the Nurburgring by Nielsen. There’s also lots of modern footage of the XJ220 being used to test the new tyres, bouncing off curbs and raised road sections as well as slithering around a wet circuit.

Bridgestone isn’t the only manufacturer that has decided to create new tyres for the XJ220. Pirelli, in a campaign to supply tyres for every Jaguar ever made, will start to manufacture its most premium tyres, P Zeros, to fit the XJ220. The Italian manufacturer hasn’t been as coy as Bridgestone and says its tyres will ‘enhance the car’s performance even further’.