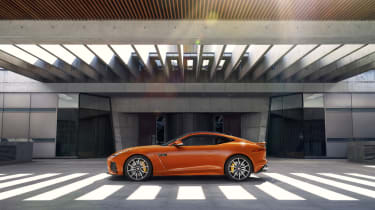 Jaguar has confirmed that the F-Type SVR will cost from £110,000 in coupe form, with the price rising to £115,485 for the convertbile version of the car. Jaguar is now also taking orders on the vehicle prior to its Geneva unveiling.

The car will feature a 567bhp 5-litre supercharged V8, the same power figures as those found in the limited run Project 7 and a 25bhp hike over the F-Type R.

The 0-62mph sprint will take 3.7 seconds in the SVR, an increase of 0.4 seconds over the F-Type R, while the top speed will be a supposed 200mph. An F-Type SVR convertible will also be available, with a top speed of 194mph. 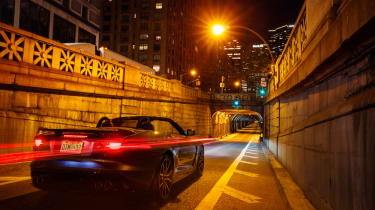 The SVR will feature multiple aerodynamic upgrades over the standard car, including a bigger rear diffuser, redesigned air inlets at the front and an upgraded splitter. The most notable change is the large rear wing which covers the entire rear-width of the car and can allegedly reduce lift by up to 80 percent, requiring lowering to manage the 200mph top speed.

Lighter and wider wheels are combined with carbon-ceramic brakes to reduce weight by 21kg, while the suspension has been stiffened to help with handling. Also featured on the SVR is a titanium exhaust.

The interior has been reworked by SVR, bringing with it an updated steering wheel, aluminium shift paddles and quilted leather.

Jaguar has created a purpose built titanium and inconel exhaust system for the SVR, which it promises will make the car sound even more extreme than the standard F-Type and offer a 16kg weight saving. 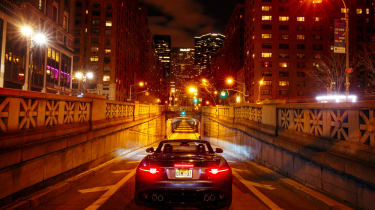 SVR's last F-Type related car was the Project 7. Boasting 567bhp and a 45kg weight drop over the standard F-Type R convertible, just 250 of the car were ever made, with a £135,000 price tag. You can read our review of it here.

The F-Type SVR's exhaust, for those interested, can be heard in all its glory in a tunnel run video filmed in New York during the auto show recently. Just click play below.