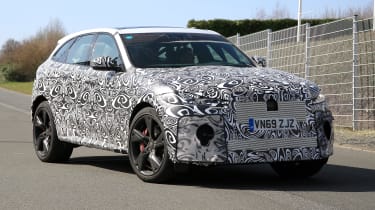 Jaguar’s new F-Pace SVR, along with the rest of the F-Pace range, is being readied for its mid-life refresh and our spy photographers have caught the hot SVR model during its testing regime. Looking every bit the high-performing SUV, its quad exhausts, lowered stance and massive alloys mark this out as the replacement for the current £75,000 range-topper.

As it stands, there’s not a lot wrong with the performance of the SVR, its 5-litre supercharged V8 with 542bhp and 502lb ft endowing it with a 4.3sec 0-62mph time, but whether it will retain its current unit has been subject to much conjecture. The V8 is currently produced at Ford’s Bridgend plant, but as was announced in June last year, this facility will be closing in September 2020, so it’s unclear whether JLR will order in sufficient supplies or source another power unit. Given the limited numbers of SVRs it produces we suspect the former option.

Externally the F-Pace SVR is expected to follow the traditional facelift procedure with updates that don’t require extensive retooling for all panels. Thus the front and rear light clusters will no doubt be updated, with the rears looking like they will lose the small crescent moon feature at the base of the lights on the tailgate and have a design more in keeping with those of the recently facelifted F-type.

Up front, expect a reprofiled bumper unit, although no doubt the large air intakes on either side will be retained in order to satisfy the cooling requirements of the V8. The grille will be subtly altered without moving too far away from its typical Jaguar look and possibly grow somewhat, as this is the current fashion among most manufacturers. 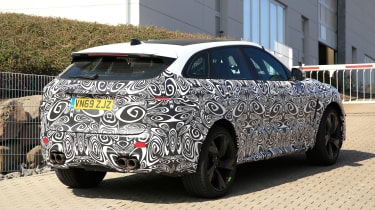 While the car’s powertrain is not confirmed, we’d expect the car’s suspension and braking systems to remain the same, with a tweak here and there to address any issues. However, the SVR’s intrinsic ride/handling balance has come in for plenty of praise, so we wouldn’t expect Jaguar to make many sweeping changes and risk upsetting one of the car’s best attributes.

It’s perhaps on the inside that the SVR needs the most updates. There’s nothing particularly wrong with the seats or accommodation per se, but the model’s basic architecture dates back to the car’s introduction in 2016 and such is the pace of change these days that it now feels rather old hat. Expect a new touchscreen set-up, driver display and infotainment interfaces.

Quite when the new SVR is likely to make its debut is currently unknown, but we’d expect it to be revealed later in 2020 before going on sale in 2021. We’ll bring you all the updates as we receive them.