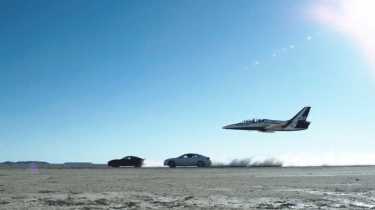 Jaguar's all-wheel drive F-Type has made an unexpected appearance in a video posted by the Bloodhound world record team. It shows desert testing out in South African while the team tests communications at closing speeds of 650mph.

Project director Richard Noble pilots an AWD F-Type as well as a Jaguar XF saloon, while a L39 jet flies passes alongside both. The aim is to get an idea of just how difficult communications will be at the 1000mph world record speed.

Data from over 300 sensors and three 720p video streams are to be sent live via the Bloodhound during the record attempt. This is the equivalent of 125mp3s being played concurrently on each run.

For those interested, you can see the Bloodhound video of the new F-Type squaring up to the jet below.