The Agera is the latest ’egg, and the R version is the fastest and most powerful 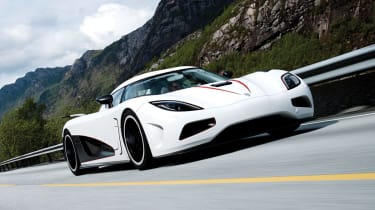 For those days when 800, 900, even 1000 horsepower simply doesn’t hit the spot, may we recommend the 5.0-litre Agera R, the car evo tester Chris Harris described as being ‘about as fast and exciting as your body can handle’.

Not entirely unexpected when you consider that this ‘hot’ version of Koenigsegg’s replacement for the CC has, when fuelled at the E85 bioethanol pump, 1100bhp, a power-to-weight ratio of 779bhp per ton and a claimed top speed of over 260mph. Harris found it beautifully built and surprisingly driveable for such a beast. While still clearly related to the CC-series, the Agera has a subtly revised body with improved aero, a whole host of changes inside, and a new, twin-turbo version of the previously supercharged Koenigsegg V8.

Agera is Swedish for ‘act’ so, appropriately, Koenigsegg took its fastest ever car and established a slew of new records. It covered the dash from 0-300kph (186mph) in 14.53sec, faster even than the 14.6sec recorded for the Veyron Super Sport. Zero to 200mph took just three seconds more, at 17.68 seconds, again besting the Bugatti. The performance tests also called on the Agera’s gigantic 397mm (front) and 380mm (rear) carbon-ceramic brakes. This time stopping from 186mph and 200mph, the R posted 6.66 and 7.28sec respectively. Perhaps the most impressive figure of all was the 24.96sec it took the Agera R to cover 0-200-0mph.

In 2012, Koenigsegg began to export to new markets, including the States and China, where one customer took delivery of a special edition Agera R called the BLT (yes, really). With a blue-tinted clear carbon body and other unique features selected by its owner, it was evidence of a growing trend towards bespoke supercars, a trend also being embraced by Ferrari and McLaren.