Kia confirms Niro hybrid utility vehicle is due in 2016 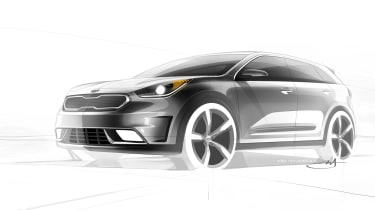 Not wanting to be left out of today’s fastest growing car segment, Kia has announced that it’ll be selling a compact SUV in global markets from late 2016. Powered by a hybrid drivetrain, the Niro will mix the space of a five-door SUV with a CO2 output of less than 90g/km.

From the sketches we’ve been provided with it appears the Niro treads the line between full SUV and crossover. It wears Kia’s familiar design language with short overhangs, and squats on large, five-spoke alloy wheels (that appear to be about 20-inches in diameter).

Though the car looks fairly large, the powerhouse under the bonnet is surprisingly small. Doing the heavy work will be Kia’s direct injection 1.6-litre four-cylinder GDI engine, producing a peak 104bhp and 108lb ft of torque alone, but it'll be mated to a 1.56 kWh lithium-polymer battery pack and 32 kW electric motor. The pairing works together to send drive through a six-speed double-clutch transmission, and the results make for a claimed sub-90g/km CO2 output.

Helping the Niro trim its contribution of atmospheric greenhouse gas is a lightweight body structure, of which more than half is made from ultra-high strength steel. Kia says that this body will also help to reduce noise, vibration and harshness transmitted into the cabin, and previews a lighter future for its entire model line-up (it wants all Kias to be five per cent lighter by 2020).

So far, Kia has only confirmed that the Niro will be sold overseas starting in late 2016. But with demand for crossovers and compact SUVs soaring all over Europe, it’d be unwise to bet against the development of a UK-bound Niro in the future.

Whether sporty utility vehicles are your thing or not, there’s no denying that a segment that contributes to 25 per cent of all new car sales in Europe is one that few carmakers can ignore. Plus, the Niro is far more than just a new model, it also previews a more efficient, lighter future for Kia – which could bode well for evo-approved models like the Procee’d GT.