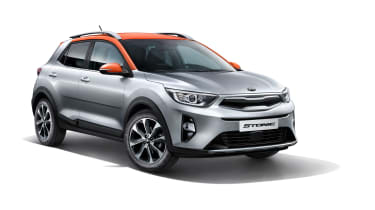 Kia has taken the wraps off its new compact SUV. Gin-and-Stonic, Stonic-the-Hedgehog, superStonic - get the puns out of the way quickly, because with the way the compact crossover market is going, you'll likely be seeing a lot of the Kia Stonic on the roads when it hits the market later on this year.

The Stonic will sit alongside the hybrid-only Niro in Kia's range, and has a lot of competition on its hands from the likes of the Nissan Juke, Citroen C4 Cactus, Peugeot 2008, Ford EcoSport and Mazda CX-3.

The production car stays pretty close in styling terms to the concept sketches we saw previously. Clearly, items like the massive wheels have been toned down, and the car appears to have door mirrors of a sensible size.

> Read all our Kia reviews here

The front end features Kia’s corporate ‘tiger-nose’ grille, which sits between sleek LED headlights. It’s slimmer than the grille on Kia’s other SUVs (the Niro, Sportage and Sorento) and is picked out with a broad chrome band. Underneath, a jutting front splitter and flared wheel arches give the Stonic a good stance. 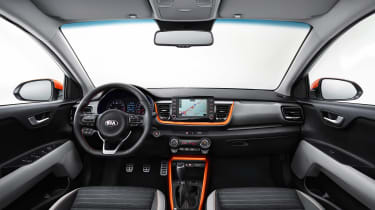 Around the rear, the styling is very clearly descended from the Sportage, with a similar taillight setup and character line across the middle. A bold silver scuff plate marks the Stonic out, however, and mates well with the roof bars on display to give a rugged character which could mark the Stonic out in the urban jungle.

Kia promises the Stonic can be tweaked to suit anybody, with ‘customisable options offered like never before on a Kia’. This echoes Audi’s strategy with the Q2 – another funky SUV intended to appeal to young city-dwellers. The Stonic will be offered with up to 20 two-tone colour combinations, with five choices for the roof alone, while the interior can be personalised just as much. Hot tech like Apple Carplay and Android Auto come as standard, and Kia promises class-competitive space for rear passengers.

The Stonic isn't likely to breathe fire when it comes to the engine lineup. A 118bhp 1.0-litre turbocharged petrol will probably be the big seller in the range, but buyers can also choose between 1.25-litre and 1.4-litre naturally aspirated petrols or a 1.6 diesel. Thrilling. We'll reserve judgement on the Stonicboom - sorry, Kia Stonic - until we've had a drive, but it's likely to become a big seller for Kia, offering the compact SUV sector clean and funky styling, plenty of kit, and the brand's seven-year warranty.