Most powerful electric drive ever in a production car 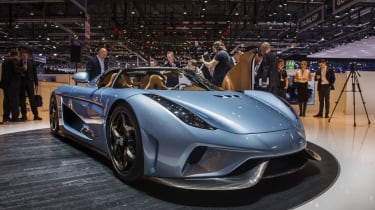 Koenigsegg is well known for its ‘more is better’ approach to power, but its new Regera hypercar is easily its most outlandish yet.

Over 1500 bhp and 2000 Nm of torque from a petrol and electric hybrid power train make the Regera the world’s most powerful production car by a significant margin.

The Regera features a twin-turbo 5-litre V8 that puts out 1084bhp and 1280 Nm of torque, this is then mated to not one, but three different electric drive units.

The first, a 160kW motor, is attached to the crank generating 300Nm. The two driven rear wheels then get one 180kw 260 Nm motor each. The combined result delivering that incredible 2000 Nm torque figure and 700Bhp on electric power alone. The crankshaft mounted electric motor acts as torque fill for the turbos, while the other two rear wheel mounted units provide drive. 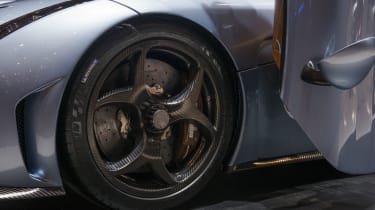 Perhaps even more exciting though is exactly how Koenigsegg is delivering all that power to the wheels.

Developed specifically for the Regera is a new ‘Koenigsegg Direct Drive system’ which can send power to the rear wheels without the need for gears or traditional variable transmissions.

It lacks a step up or step down gear, instead transferring power instantly from the engine to the driven wheels. The system also allows the Regera to operate in a purely electric mode.

Koenigsegg is promising fairly extreme performance figures for the Regera, as you would expect. It manages 3.2 seconds between 150 to 250 Km/h, with a full 0-400 km/h sprint taking less than 20 seconds.

Developed in conjunction with Mate Rimac, well known for his work on electric supercars, is a new power pack for the Regera. Weighing in at 115Kg and storing 927 kWh of energy, the system is able to dump a full 500 kW of power during periods of heavy acceleration. Regenerative braking can then restore over 150 kW of power. 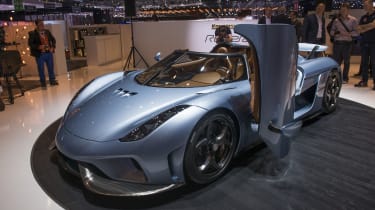 The rest of the Regera’s spec sheet reads just as extreme. It features a bespoke Akrapovic developed titanium ‘fish tail’ exhaust system, as well as a carbon-fibre aluminium honeycomb chassis.

Brakes come in the form of 6-piston 397mm discs at the front, with 4-piston 380mm discs at the back. Both are ceramic and both use Koenigsegg developed callipers with ceramic pistons.

Keeping the phenomenal amount of power translated to the road is both an advanced traction control and stability control system featuring switchable modes. Drivers can change from track, to normal and all the way to wet for slippery conditions.

Active aerodynamics are put to use extensively throughout the Regera. The rear wing and front flaps can all change independently, but generate a combined 450Kg of downforce at 250km/h. 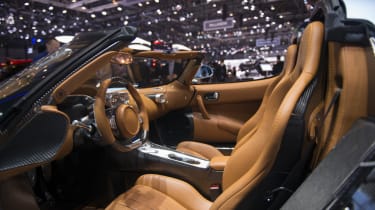 Tyres are bespoke Michelin Supersports. 275/35 19-inch offerings at the front and 345/30 20-inch at the back. These are sat on second generation Koenigsegg Aircore carbon fibre wheels.

Interestingly Koenigsegg has opted for a Apple CarPlay compatible touch screen mounted in portrait orientation in the centre console. A simple drive select lever sits in the centre.

All this technology and power and still the Koenigsegg manages an impressive 1628 Kg curb weight.

Full performance stats are still to be confirmed, as is pricing for the car. What we do know is that just 80 examples will be produced. The car is said to cost around $1.89 million