The One:1 sets another lap record - but Koenigsegg is denied exploring its full potential 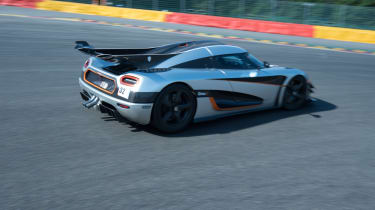 It’s not been a great few months for Koenigsegg’s lap record-setting attempts. First, the Swedish firm is denied the opportunity to run at the Nurburgring flat out, thanks to speed restrictions – and now, it’s fallen foul of Spa’s noise meters.

Koenigsegg recently spent two days at Circuit de Spa-Francorchamps with its One:1 ‘megacar’, hoping to beat its own 2:33.26 lap record for a road-legal production car.

In theory, they managed that feat, setting a 2:32.14 lap around the daunting circuit on a practice run. Koenigsegg’s disappointment, as the company’s blog notes, is that they failed to go even quicker.

The idea was to use the first day of testing as a setup day, honing the car’s specification for a record-setting run on the second day. The trouble was noise: While day one at the circuit allowed for a 110dB output, day two’s limit was dropped to 103dB.

Koenigsegg describes this situation as ‘tricky’ – as you might expect from a 5065cc, twin-turbocharged V8 with a 1341bhp output. Despite hasty and ‘unsightly’ modifications to the car’s exhaust system – giving the One:1 a distinctly diesely downward-pointing pair of pipes – the car still tripped Spa’s noise alarm on its full-throttle lap, cutting the session short. 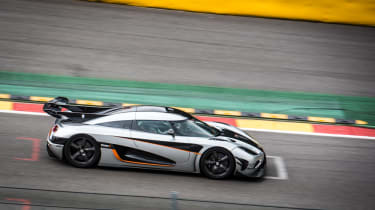 For the supercar firm, the frustration is obvious – had the team continued to set laps on day one, there’s every chance the car could have gone quicker. They were running on older tyres, and several other cars were on the circuit at the time. With a fresh set of rubber and an empty track, there’d be plenty more potential.

As Koenigsegg notes on its blog, it’s not unusual for a high-end supercar to succumb to noise limits at circuits.

While vehicles habitually pass road-going noise regulations – the European drive-by limit of 82dB is recorded at 30mph and three-quarters throttle – many high performance vehicles have exhaust flaps that open under larger throttle outputs.

Circuits near residential areas often have limits in place on open-track events to prevent issues with the local population, and while higher than road limits, these can still be restrictive for particularly noisy sports cars.

Koenigsegg has hinted that it aims to return to Spa to meet its ‘full potential’. In the meantime, you can watch a video of the 2:32 lap below.