1100 bhp Agera R has been testing in Singapore, and has set some new performance records. 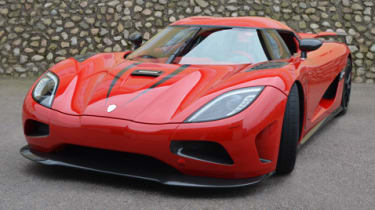 Described by Chris Harris in evo158 as ‘about as fast and exciting as your body can handle’, the Koenigsegg Agera R has empirically demonstrated this by setting a brace of new production car performance records.

The particular Agera R featured is the first in Singapore and is to be shown at the upcoming Singapore GP. In case you had forgotten, the Agera R is powered by a mid-mounted, twin-turbocharged 5-litre V8 which produces 1100 bhp and 885 lb. ft. Weighing only 1435kg, this gives the Agera a power-to-weight ratio of 779bhp/ ton which is enough, say Koenigsegg, to allow a 0-60mph time of less than three seconds and a top speed in excess of 260mph.

The Koenigsegg was tested over a variety of perfomance tests covering acceleration and braking, where it produced some phenomenal figures. It covered the dash from 0-300km/h (186mph) in 14.53 seconds, for instance, slightly faster even than the 14.6 seconds recorded for the Bugatti Veyron Super Sports. A run from standstill to 200mph took just three seconds more, at 17.68 seconds. The performance tests also called on the Agera’s gigantic 397mm (front) and 380mm (rear) carbon-ceramic brakes. This time stopping from 186mph and 200mph, the R posted times of 6.66 and 7.28 seconds respectively.