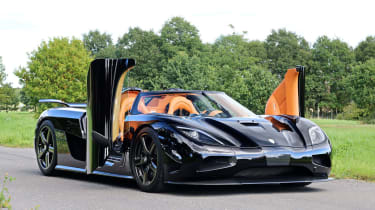 The last ever Koenigsegg Agera R to be produced is on sale for £1.225 million + VAT – or £1.47 million including UK taxes. With just one year, one owner and 1500 miles under its belt, the 273mph hypercar – which is on sale at Ascot dealer Super Vettura – is priced at close to £390,000 more than the Agera R’s original list price.

As the last of its kind, this Agera R is not only powered by a 1140bhp and 885lb ft of torque twin-turbo 5-litre V8, it also receives the model’s fastest changing iteration of seven-speed dual-clutch gearbox. 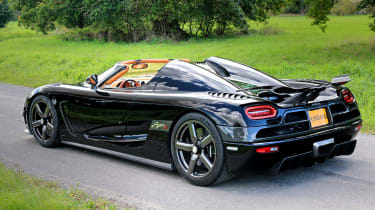 This enables it to charge from 0 to 62mph in a claimed 2.9 seconds, while a generous torque window (all 885lb ft is available from 2700-7300rpm) ensures 200mph comes in a Guinness Book of Records quoted 17.68 seconds. The car won’t stop accelerating until it reaches a claimed 273mph top speed.

But this isn’t just a straight-line machine – as much as 1.5 lateral G can be produced thanks to the R’s ability to generate 300kg of downforce at 155mph. 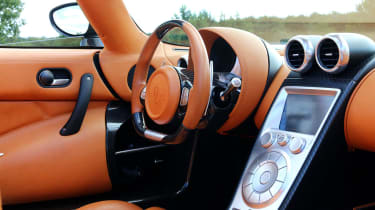 Contrasting this dark exterior is an interior swathed in orange leather, and the overall package makes for arguably one of the most desirable Agera Rs ever sold.

We sampled the Agera R back in evo 180, and were astounded by its effortless ability to blur scenery. Today, four years after the model was introduced, the Agera R still ranks alongside the fastest of production hypercars. Its top speed even matches Koenigsegg‘s fastest current models, the Agera RS and One:1.