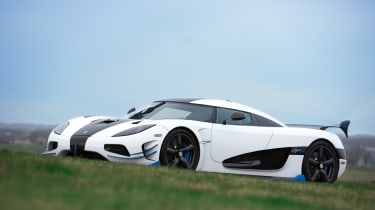 Koenigsegg has revealed another one-off version of its carbonfibre supercar, the Agera RS. The new car, dubbed the RS1, is on display at this year’s New York auto show and is part of a series of 25 Agera RS models that have been individually created for each owner who signed-up to the programme over a year ago.

The first of the exclusive cars, the Agera RS Gryphon, appeared at this year’s Geneva motor show. Like the black and gold Gryphon, the RS1 has a distinct colour scheme too. The body is mostly white with exposed carbonfibre stripes, but there are also bright blue highlights on the dive planes, side skirts, rear wing and diffuser.

The same shade of blue that creates the relatively subtle highlights on the outside is replicated in the interior. However, rather than being equally understated, the inside is dominated by the blue – the seats, dash, bulkhead, a-pillars and roof lining are all covered in bright matching Alcantara. The rest of the interior is finished in polished carbonfibre and black anodized aluminium. 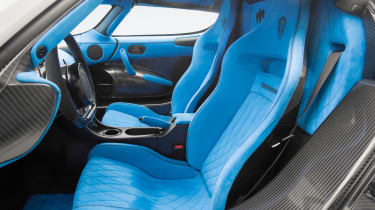 The RS1 has been fitted with the optional more powerful engine that Koenigsegg call the 1MW. This twin-turbocharged 5-litre V8 motor produces 1341bhp and 1011lb ft of torque, and sends drive to the rear wheels through a seven-speed paddle-shift gearbox.

As part of Koenigsegg’s obsession with reducing weight, not only does the RS1 have a carbonfibre monocoque chassis strengthened by honeycomb aluminium – just like the Bugatti Chiron – but it also has carbonfibre wheels and lightweight sound insulation. Such drastic extents to reduce weight are slightly in contrast with the RS1’s full complement of luxury equipment though. It is also fitted with climate control, a full infotainment system with Bluetooth integration, a front axle hydraulic lift and tyre pressure monitoring system.

> Read our review of the Bugatti Chiron

Still, the Agera RS1 weighs 1394kg (or 1290kg dry), an impressive figure for a supercar. Its huge power and light weight means that the RS1 can accelerate from 0 to 62mph in just 2.8sec and 186mph in an amazing 12.3sec. Koenigsegg also claims that, thanks to the RS1’s low kerb weight and the added benefit of active suspension and aerodynamics, it's capable of pulling 1.8G in a corner. 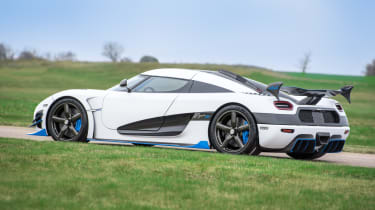