The creator of the mighty 1341bhp Koenigsegg One:1 reveals his secrets for reaching 273mph in our latest exclusive video 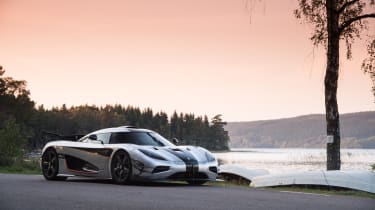 It’s not often you get the chance to interview an individual as interesting as Mr Koenigsegg himself. This is the creator of one of the maddest car companies in the world, responsible for some of the most effective landscape-blurring hypercars ever built. The man is as big as his numbers, and that’s saying something, because his latest creation, the One:1, is capable of 273mph. Two hundred and seventy three.

This exclusive interview with him is therefore a pretty big deal. Sitting in front of the car that could quite literally obliterate the trio of hypercars from Ferrari, McLaren and Porsche, Christian gives us an inside scoop into the concept, design and engineering marvels of the One:1.

Despite being the brainchild for some of the world’s most exhilarating hypercars, Christian exudes a passion and love for what he does that makes him as approachable and honest as, say, a local mechanic. He’s far from that though, and the £2million carbonfibre, Kevlar and titanium 1341bhp beast that sits behind him confirms it.

All six One:1s have been sold, asserting the confidence customers – who have more than enough cash to choose from any of the big hypercar makers - have in Christian’s Angelholm based company. The Swedish firm’s latest creation looks set to be the first production car capable of producing 1 megawatt (Christian calls it the first ‘megacar’), and is capable of producing 2G of lateral cornering force. It also sports the world’s first production top-mounted active rear wing, and could be the first road car capable of reaching 400kmh (249mph) in under 20sec.

We could go on about how spectacular and mind-blowing this car is (Jethro did after his test drive in evo 202), but today we’ll let the boss do it himself. Watch our exclusive interview and view our mega-gallery above to be taken under the carbon-Kevlar-skin of the Koenigsegg One:1. It’s nothing short of unbelievable.