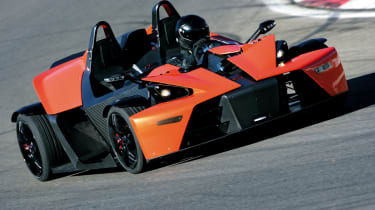 The X-Bow looks terrific in KTM's signature colours of orange and black. The expanses of naked carbonfibre beneath the 'floating' orange panels help to give it a very expensive look compared with other trackday-type cars, though with prices from 40,000 euros plus local taxes (approximately £31,500), it's not as costly as you might expect.

The clever thing about the X-Bow is the way KTM's partner Dallara has engineered it so that almost all the components bolt directly to the carbon tub, including the rear aluminium subframe that supports the gearbox and suspension. This makes construction simple as well as keeping the weight down; the whole tub weighs just 70kg, and the anticipated kerb weight is 700kg.

The suspension shows no compromise either, with double wishbones all round, each a work of art fashioned from wing-profile steel tubing in order to minimise drag, and pushrod dampers. Aluminium was dismissed as it would have meant bulkier wishbones that would hinder the flow of cool air to the radiators either side of the cockpit.

Inside the sparse cockpit the seats are moulded into the tub, adding to structural rigidity, the X-Bow catering for drivers of different sizes with a pedal-box mounted on easily adjustable runners. There will also be a choice of padding for the seats.

Between the seats of this prototype car is a push-pull gear selector, engineered by KTM, that cleverly converts the conventional H-pattern selector of the Audi-sourced six-speeder into a semi-sequential shifter. If it works as well as hoped, KTM expects it to make the optional DSG gearbox redundant before the car has even been launched. Very neat, especially as DSG would add 30kg.

Aided by a specially developed limited-slip differential, the X-Bow's 2-litre FSI turbo Audi engine is said to punch the car from 0-100kph (62mph) in under four seconds.

Rather than use Audi’s preferred air-to-air intercooler, a water-to-air chargecooler has been employed. Although this brings the complication of an additional water pump, computer analysis predicted better cooling of the charge air this way, giving both more power (220bhp in total) and easier packaging of the radiators in the relatively tight side-pods.

Getting sufficient air to these pods proved a major headache for the designers, but over 100 hours in Dallara’s wind tunnel have helped with the design in this area. The car also develops a massive 200kg of downforce at 125mph (a Lamborghini LP640 produces just 70kg at the same speed), which is split equally between the two axles so the handling balance doesn't change as speed increases.

If you were thinking of buying one of the initial run of high-spec ‘Series 100’ X-Bows, you're too late. As soon as our first story broke (evo 100) the phone lines lit up. Three months on, all 100 are sold, despite the car not making its debut until this month's Geneva show and a price of 52,000 euros. The good news is this success makes the decision to put the car into series production almost inevitable.

Work is now concentrating on making sure the car lives up to its promise. Having seen it in the flesh, it looks like getting the quality right shouldn't be a problem. KTM expects the first customers to get their cars in late 2007 or early 2008, and we hope to drive the prototype this summer.