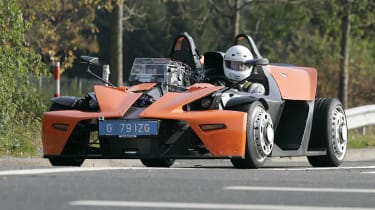 Just a few months after the official unveiling of the KTM X-Bow (pronounced 'cross-bow'), the Austria-based motorcycle-manufacturer has more than 1000 firm orders for the vehicle. This is far more than ever expected.

Production starts in early 2008, and the first cars will be delivered to customers in spring next year. KTM plans to build around 1000 units in 2008 and up to 5000 X-Bows in each of the following years. The first 100 vehicles will be specially equipped and will wear a number-badge to indicate they belong to a limited series.

The basic version will be powered by Audi’s two-litre four-cylinder unit with FSI direct injection and turbo, delivering 220 bhp. Insiders state this will accelerate the car from 0 to 100 km/h in less than four seconds. An even more powerful version could make use of the Audi S3’s engine and have an output of up to 300 bhp.

With a homologation for small series, the KTM X-Bow will generally be a road-legal vehicle in Europe. But as these regulations are differently defined in the various EU-countries, registration for the roadster will only be available in Germany, Finland, Greece, Netherlands, Austria, Portugal, Switzerland.