AmD is the first tuner to tackle KTM's X-Bow. We go to Brands Hatch and get wet... 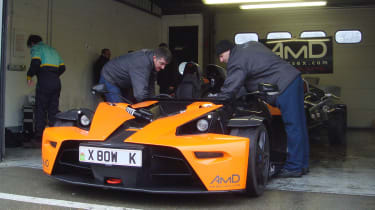 Anticipation can be a dangerous thing. For a couple of years before its official launch we’d been teased by images and specs of the wild and radical KTM X-Bow to such an extent that by the time we finally got our hands on one last summer we were expecting big things. It delivered on one level; the build quality and finish were superb and far beyond what we have come to expect from this minimalist class and it rode beautifully too, but there was no spark to really light our fire. Trouble was, there was just too much civility, and as we said at the time it never truly bears its fangs, it lacked the in-your-face adrenalin hit of the likes of the Ariel Atom or Caterham R500. After all the hype and build up it failed to engage the driver and ultimately that was disappointing.

Most of this stemmed from the four-cylinder, turbo-charged Audi unit that, although efficient, lacked aural charisma and has a power delivery so linear it never really excites nor challenges the driver, absolutely key in a car built around about raw thrill. Perhaps this, and AmD Technik tuned version can restore the missing involvement and visceral thrills. It’s a £5,500 package that increases power from 237bhp to a very fat 365bhp thanks to an upgraded turbo and injectors (from the Audi S3), a new air intake system and exhaust to transfer air through the system faster, a new fuel pump to increase the flow and a remap to bring it all together. The guys from AmD Essex, reckon it’s enough to knock half a second from the standard car’s 3.9 second 0-60mph time and they’ve invited us to Brands Hatch to try it for ourselves.

Shame it’s tipping down with rain then, it makes it very difficult to give a definitive verdict on the success of the character transformation, particularly when slithering around on tyres designed for dry tarmac rather than puddles. Still, the extra shove is immediately apparent, particularly above 4500rpm where your thumped in the kidneys as the X-Bow hurls itself towards the next braking zone and the rev needle flies around the dial, before you grab another gear and it all happens again. The custom exhaust is tunable for volume level and at Brands – despite their restrictive regulations – it was turned up, so it was plenty loud enough for the beat to heard clearly above the wind whisking around your helmet along with all the other whooshes and tweets you’d expect from the tuned turbo unit.

At well over £80k for this carbon model, or around £60k for the plastic-bodied version it’s difficult to claim the X-Bow is fully in-tune with the current economic climate, but you can’t argue against the individuality of its looks. If that draws you in then we reckon you might as well spend the extra as the AmD Technik version comes far closer to delivering on the experience promised by the outrageous body than the standard car does.

Following a glimpse of the GT2 derivative, KTM has now uncovered its X-Bow GTX racer in full