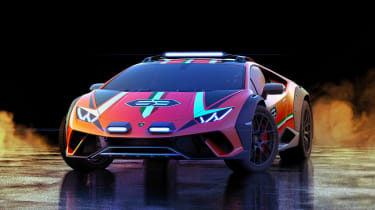 We’ve already seen Lamborghini’s idea of a modern SUV in the controversial Urus, but this is perhaps a type of off-roader we can get more on board with. The car in question is a one-off called the Huracán Sterrato (Italian for dirt, creatively) and essentially builds on the current Huracán Evo with a scattering of off-road upgrades, including some bespoke bodywork and an upgraded interior.

If the notion of an off-roading, mid-engined supercar sounds a little unusual, it’s worth remembering that two of the greatest Rally and Rally Raid cars in history followed this template, namely the Lancia Stratos, and later the iconic Rothmans-liveried Porsche 959 that rose to fame by winning the 1986 Paris-Dakar.

> Click here for our review of the Lamborghini Huracan Evo

While this Huracán Sterrato might seem a little less specialised, the concept still adds plenty of off-roading addenda to the Huracán Evo’s basic package, including a toughened underbody, aluminium skid plates and a 47mm rise in ride height. The bodywork has also been widened with some composite add-on arches and modified bumpers and sills.

The wheels are new 20-inch units on chunkier tyres with reinforced sidewalls, popping ever so slightly outside of their arches. A natty addition are the two air deflectors situated just in front of the side intakes, theoretically keeping dust and stones from entering the engine compartment. Some additional LED lighting front and rear, plus those wonderful roof racks, complete the exterior package.

The interior has also been tended to, with a new titanium roll-cage, carbonfibre bucket seats and aluminium floors matching the Sterrato’s toughened image.

Under the slatted rear deck lies the same 5.2-litre naturally aspirated V10 engine as in the Huracán Evo and Performante that came before. Power is also identical, at 631bhp, sent to all four wheels via a dual-clutch transmission. The standard Evo’s LDVI integrated vehicle dynamics system is also included, with a new off-road setting that will send a majority of the power rearwards for added sliding ability, if not outright speed on loose surfaces.

Of course, Lamborghini’s plans to put the Huracán Sterrato into production remain extremely unlikely. In fact, such is the current high-end car market that the chance of a track-focused Urus is a far more realistic reality, but we can still dream. On sale, well, never, the Huracán Sterrato at least proves that Lamborghini still has a sense of humour.