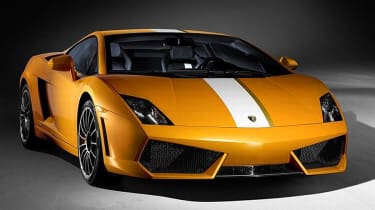 This new limited edition Gallardo LP550-2 Valentino Balboni marks a return to rear-wheel drive for the first time since the Diablo. Only 250 units will be made in honour of retiring test driver, Valentino Balboni, who became part of Lamborghini in 1967.

Lambo have quoted a 0-60mph time of 3.9 seconds, which is down 0.7 seconds on the original LP560-4, and a top speed of 199mph, also slightly down from the older Lambo, but straight-line speed isn’t the point of the ‘Balboni’. Lamborghini claims that the LP550-2 was conceived in line with Valentino Balboni’s own thinking which obviously involves the thrill of cornering in a rear-wheel drive supercar.

Lamborghini has relocated the transmission to the rear axle, resulting in a 43-57% front-rear weight distribution to maximise controlled oversteer. New springs, dampers, stabilisers, tyres and even the aerodynamics were also adjusted to help change the power flow.

A 45% limited slip diff was redeveloped for the rear-axle and adjustments were made to the ESP system. The CORSA program allows the LP550-2 to stretch it’s power-sliding legs a bit more than the standard program.