Lots of cars pretend to be road-racers. The Dauer 962 Le Mans was the real thing 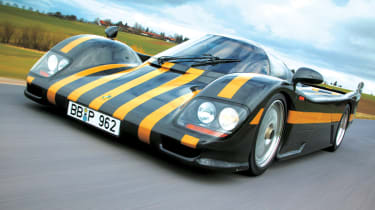 So perhaps it’s no surprise that, back in the late ’80s and early ’90s, the sights and sounds of the Le Mans 24Hrs were no longer restricted to a small town in France over a weekend in June. Road versions of Porsche’s legendary 962 were wearing number-plates and, if you were lucky, snorting and rumbling down a street near you.

Browse through Group C racers on evo Cars for Sale

A number of outfits tried their hand at the 962. Vern Schuppan’s was pretty good, and there were also more than passable efforts from Koenig (the C62) and DP Motorsports (the DP 962). Eclipsing them all, however, was the Dauer 962 Le Mans created by ex-racer and team owner Jochen Dauer. It was so good, in fact, that Porsche teamed up with Dauer in 1994 and won Le Mans all over again.

Dauer’s mission wasn’t to produce a sanitised, road-legal facsimile of the Le Mans winner but actually improve it in the process. Although the starting point was a genuine 962 chassis, Dauer clothed it in a carbonfibre/Kevlar bodyshell and tweaked the aero too. Of its early-’90s contemporaries only the McLaren F1 would have been able to give the Dauer a hard time, and then only in a straight line. Mechanically, the Dauer differed from the 962 only in that it was more powerful. Divested of the need to comply with race regs, its mid-mounted twin-turbo 3.0-litre flat-six developed 730bhp. Just over a dozen Dauer 962s were built. Fortunately for today’s hypercar owners, they’re a very rare sight.