We drive more than 2000 miles in the new Lamborghini Huracan. Plus: BMW i8 v Porsche 911 and Audi R8 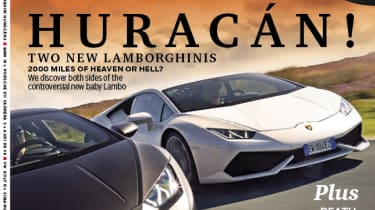 Buy a copy of evo 201 in our online shop

It may have more than 600bhp and it may look as outlandish as any other recent Lamborghini, but there are underlying concerns that the Huracan isn’t quite as spectacular to drive as its design suggests. Meaden takes one to the North York Moors to decide once and for all, while Prosser spends a week in another, putting it to a longer test by driving it all over England. It’s a dirty job, etc.

BMW’s hybrid sports coupe may have broken new ground in the technology stakes, but it still has to face up to rivals that are more conventionally powered. We pit one against an R8 V8 and a 911 Carrera S on road and track

British carmaker takes the design of the stunning Lola T70, recreates it for the modern day at a quarter of the current values of the original car… and gives it to Meaden to race at Silverstone

Subaru’s rally-honed legend now has a similar price and power output to the top hot hatches. We see how it fares against one of the current benchmarks.

The Future of Motorsport

What will motorsport be like 125 years from now? How can the current sport be improved? We grill the experts

Reader Rob Chittock emailed us to ask which would be the best tyres for his Audi TT, so Henry headed to Italy with Golf GTI and laptop. This is for you, Rob…

The full technical lowdown on McLaren’s borderline-insane P1 GTR, and a picture postcard of the, well, er, picture-postcard setting that is Monterey Car Week in California

Meaden’s swapped four wheels for two in an attempt to relive his youth, while Porter, not to be outdone in the low-speed stakes, is in an old Montego

You tell us what bits you’d like to see on your Ultracar, and recall the cars you’ve owned for the shortest and longest times

Dobie’s gone, and that means the Clio Williams has lamentably gone with him. Meanwhile, the Secret Supercar Owner is mulling over his options with his Ferrari F40

If you’re in the market for a used Audi S3, read this before you even think of checking evo Cars for Sale. Then buy a top-notch example and take it on this month’s Great Drive on the Isle of Mull

Buy a copy of evo 201 in our online shop