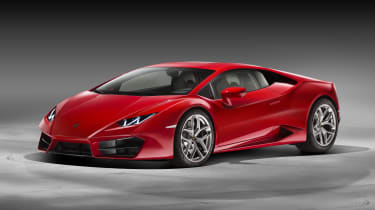 Lamborghini has unveiled a new rear-wheel drive variant of the Huracan. Called the LP 580-2, the new car boasts a 33kg weight drop over its four-wheel drive cousin, tipping the scales at 1389kg.

Lamborghini says it has set the car up to offer 'oversteering characteristics, which emphasise authentic rear-wheel drive behaviour'. Chassis revisions include stiffer springs and revised anti-roll bars, while Lamborghini has upped torsional rigidity over the old rear-wheel drive Gallardo by 50 percent. The car is also stiffer than the four-wheel drive Huracan and gets a 40:60 rear weight distribution. 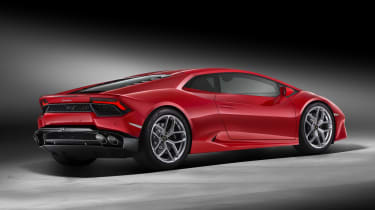 The Huracan's driving modes, all of which are governed by the 'Anima' button found on the steering wheel, have been recalibrated for the rear-wheel drive car. Other changes include cylinder deactivation technology for the V10 engine, allowing the car to run on five cylinders at cruising speeds to save fuel. Being rear-wheel drive and lighter, CO2 emissions have dropped down to 278g/km.

External differences over a standard Huracan are subtle, but include new air intakes on the front to increase front axle downforce. The rear-spoiler is now setup to work with the diffuser and offer improved airflow around the rear.

Huracan LP 580-2s will come standard on Pirelli PZero-shod 19-inch wheels as standard; 20-inch alloys will be an option.

The car has been confirmed at €150,000 plus tax in Europe, with UK pricing still to be confirmed. Even so, a drop of €53,000 over a four-wheel drive LP 610-4 should translate to cheaper prices for the rear-wheel drive Huracan when its cost in the UK is eventually announced.